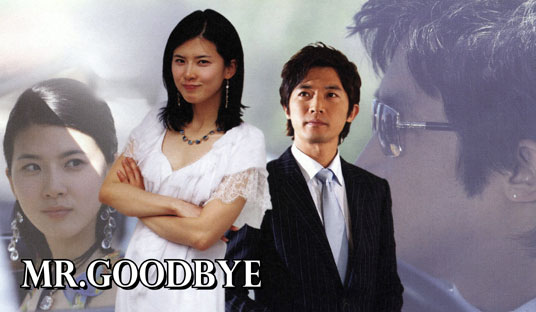 'Mr. Good-Bye' is a story about the last love of a dying man, Hyeon-seo, who had to live in loneliness after losing his both foster parents but eventually succeeded as a hotelier. He finally finds happiness when he returns to Korea, where he learns that he has a son from a woman who loves him and finally meets his biological mother. The series also sarcastically portrays good and evil of the human world with a hotel as the background. The series also depicts how hotel concierges help hotel customers heal their spiritual wounds. The upbeat and outgoing Young-in, one of the concierges, teaches Hyeon-seo the meaning of love and fights for his love with Su-jin, a doctor.

Yoon Hyeon-seo: After his biological parents abandoned him, Hyeon-seo was adopted to the United States but had to live in loneliness after losing his both foster parents. With much effort, he turns into a successful hotelier and one day returns to Seoul, where he meets Young-in. The two begin their topsy-turvy relationship in Las Vegas and eventually fall in love with each other. But their happiness doesn't last long as Hyeon-seo learns that he will die soon due to complications from a heart surgery he underwent five years ago. He finally tastes happiness when he receives love from two women, Young-in and Su-jin, and learns that he has a son.

Choi Young-in: Outgoing and undaunted, Young-in wins a marathon to win a trip to Las Vegas with her boyfriend, but one day witnesses her boyfriend making love to her best friend. She ends up leaving for Las Vegas alone, where she meets Hyeon-seo and their paths cross. After returning to Korea, Young-in gets a job at a hotel as a concierge and falls in love with Hyeon-seo after much bickering.

Kang Su-jin: A confident single mother, Su-jin is Hyeon-seo's college alumnus and a heart surgeon as well as his doctor. She raises her son on her own but her life represents an ideal life of a successful modern-day woman. But she also has a secret: her son is Hyeon-seo's child. She conceived him on a sperm that Hyeon-seo donated a long time ago. She regards Hyeon-seo as just a friend, but gradually develops warm feelings toward him and decides to win his heart.

Kyle:Kyle's father, a Japanese businessman, died when Hyeon-seo pushed for the sell-off of his hotel. To avenge his father's death, he goes to Korea and gets a job as a concierge chief at the Empire Hotel with the ultimate goal to trap Hyeon-seo. He also secretly develops passionate feelings toward Young-in.