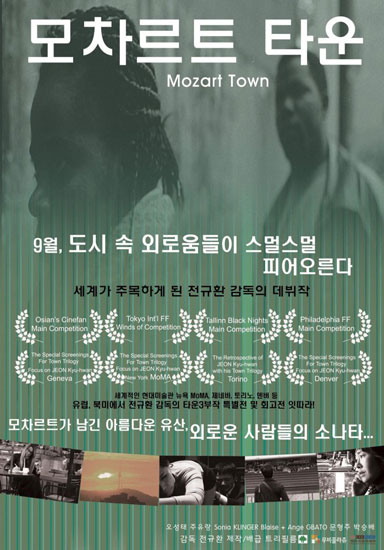 Mozart Town should be Salzburg, but in this film it happens to be the capital of South Korea, Seoul. In the title, "Town" has more significance than Mozart, because the film is foremost about the city, and the interwoven lives of its denizens.

Young director Jeon Kyu-hwani's debut work is certainly his own unique vision. It's not a big-budget masterpiece done with expensive equipment, but instead offers a taste of the Korean film world, where glamour and major studios don't yet play a big role. What we can say of this film is that for the sake of keeping the city stories authentic, the actors are all amateurs.

One remarkably straightforward character is Ji-Won, who runs a small newspaper stand and whose hobby is to secretly photograph passersby. Also in town is the pianist Sara from Slovakia and the Africans Etoo and Ayo, who are engaged in earning illegal money.

The people of Mozart Town are rather sad and lonely, seeking their places in the world. But will they ever find them? In filming them, Jeon Kyu- Hwan has used simple methods which bring the sad notes of the city to the fore.