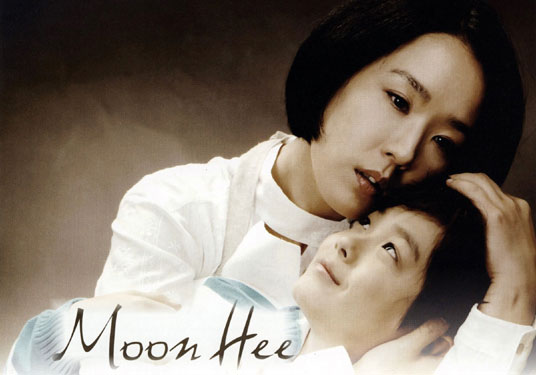 For MBC Wallpaper from this drama : http://www.imbc.com/broad/tv/drama/moonhee/wallpaper/index.html


The weekend drama series is a story of motherhood and sacrifice. The heroine Moon Hee is forced by impossible circumstances to leave the child that she gave birth to when only eighteen years old. On the verge of accomplishing everything – a marriage with the man she loves, success, and a vengeance complete, she is awakened to the love she bears for her lost child. The stories of two mothers, Jang Han-na and Moon Hee, reveal the love of a mother for her child, the sacrifices that love demands, and the truth that motherly love is not an innate quality, but something that must be nurtured and learned from at the same time, much like a child growing up. The drama intends to encourage the less-than-responsible mothers of our day, who know no sacrifice and sometimes go as far as to abandon their child, to think about the true meaning of motherhood.

The heroine, an illegitimate daughter of the ‘Shinchonji’ department store mogul, Chairman Moon.She falls in love at age eighteen, has a son – Ha-neul, but is forced to send him off for adoption. This secret lurks about her, always threatening to come to light. Moon Hee leads a life of hardship, and the impossible circumstances force her to leave her own flesh and blood.Like her father, Moon Hee is unflinching and tenacious.With the goal of taking over ‘Shinchonji’, Moon Hee struggles to outdo her contenders, Moon Ho and Moon Hyun. She does this believing that only this will be a fitting revenge for the death of her mother Ha Soo-jung, caused by the negligence of Chairman Moon and his wife Bang Sook-hee.Moon Hee disguises her vengeful intentions, treating Bang Sook-hee with the air of utmost reverence. In a feat of patience and will, Moon Hee manages to live her life with Bang Sook-hee, her sister-in-law Choi Sang-mi, and her stepsister Moon Hyun, all of them waiting for the first chance to find fault with her. However, she is actually falling apart inside. Nobody knows that, for Moon Hee, it is only spite and obstinacy that keeps her going.

Son of the Tongju linen store owner.Forced to either get married or take over the store by his mother Song Ok-hee, he marries Jang Han-na at age twenty. Six years older than Kim Young-chul, Jang Han-na is more like an elder sister than a woman for him. Believing that having a son would let him off the leash, he fathers two children – San and Deul, both daughters. After finally producing a male heir, Ha-neul, he uses a separate room from his wife. He is not unaware of the love Jang Han-na bears for him. However, because he cannot bring himself to treat her as a wife, he loyally reveres her as an elder sister instead. Even despite his willingness to die if it were for her, he finds it impossible to love her as a woman.In this age of feeble men, Kim Young-chul is a true man.Although not really a job, he runs a Hapkido gym near the Gwangjang Market. Because of this, he tends to get unintentionally caught up in marketplace brawls, and ends up becoming notorious for a long list of assault records before he knows it. Kim Young-chul loves drinks and people, and can play any instrument from the trumpet to the guitar. Romantic that he is, his one regret is about love. Is this how life slows to an end? Does time fade away and youth with it, as old tales and deeds become lost? As loneliness takes over Kim Young-chul, he meets Moon Hee.

A specialist in family medicine and successor to Kuhsan Hospital. His father, Dr. Yoo Hyun-jong, had him study anatomy in a private lab in an effort to train him to become a skilled surgeon. However, Yoo Jin’s sensibility and warmth compel him to take up family medicine.He is a sweet man. Although at times seeming to be sweet and dandy like a melting marshmallow, inwardly he is extremely confident and eager to win, as is the way with people who have never met with failure in their lives. He may be the perfect man, but has a major weakness – fastidiousness. Yoo Jin cannot tolerate soiling the purity of love. This characteristic is the reason he loses Moon Hee.Because his father was the Moons’ family doctor, he was close with the family and regarded Moon Ho and Moon Hyun as his siblings. Then one day in high school, he meets Moon Hee. The tears that Moon Hee shed when she was brought to the clinic by Bang Sook-hee for a paternity test, stirred sympathy in him, a feeling which eventually grew into affection. Yoo Jin’s parents, who take great pride in their prestigious descent, are opposed to his meeting Moon Hee because she was a child produced by an extramarital relationship.

The 3rd inherited owner of the Tongju linen store.She marries Kim Young-chul at the age of twenty six.She had worked as a clerk at a linen store in Damyang which had dealings with Tongju, when Song Ok-hee found that Jang Han-na’s strong character would make her an ideal daughter-in-law. Having lost her father while still young, she was struggling to pay for the schooling of her younger siblings when Song Ok-hee offered a deal. Jang Han-na agreed to marry Song Ok-hee’s son on the condition that college tuition be paid for her younger siblings and a store be opened for her mother. Song Ok-hee is harsh to her daughter-in-law, often beating her while rigorously training her to become the next leader of the Tongju linen store. Jang Han-na is of an unyielding character, not bending her will regardless of how much she is thrashed by her mother-in-law.She earns a name for herself in the Gwangjang Market as a storeowner not to be fooled with, the rightful heiress to Song Ok-hee. However, despite her tough ways, her heart is feminine and soft. She loves her husband Kim Young-chul, though he may be childlike and the same age as her younger brother. There are times when she would like to lean on his shoulder, and feel like a loved wife. In an effort to attract her husband, she tries everything from Botox to Andre Kim-designed lingerie. Despite such efforts, Kim Young-chul respectfully regards her as an elder woman.