Moon River (The Return of Iljimae) 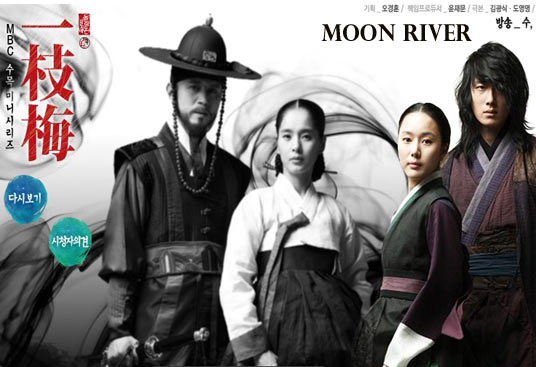 He was born out of wedlock and his father was a high-ranking Champan official while his mother was a lowly servant. To protect the honor of his father's family, he was abandoned as a baby and tucked underneath an apricot tree. He was given the name Iljimae (A branch of Apricot Tree). Iljimae was adopted by a family who lived in the Qing Kingdom. After tracing his roots back to Korea, his father rejects him once more. With a heavy heart, he returns to his country and unleashes his anger upon the ruling class to fight their injustice and tyranny for the sake of the commoners. Wherever he appears to uphold justice, he leaves behind a single branch of an apricot tree... Wol-hee is the one woman in Iljimae's life who reconnects him to the world as he lives an isolated existence and hides his face behind a mask to be a hero to the people.

Iljimae, a hero who appears when the world needs justice. / actor Jung Il-woo

Although he is a handsome man with delicate features, he also has a strong sense of justice and chivalry. His first love dies tragically and after living an aimless life due to his broken heart, he meets Wol-hee, who is very similar to his first love. He became a legendary hero in the kingdom but his destiny is one of loneliness and heartbreak, making him a lonely and melancholy hero.

Wol-hee, the woman whom Iljimae loves for his entire life. / actress Yoon Jin-seo

Iljimae loves her for his entire life and she loves him back unconditionally. She was ahead of her times and displayed a strong, charismatic personality and a burning defiance against evil people. She took control of her destiny but in Iljimae's presence, she would turn into a shy woman.

Koo Ja-myung, Underneath his charismatic demeanor he has a sad past / actor Kim Min-jong

He is a state investigator who is a sharp thinker. He rises through the ranks in the government as he distinguishes himself as a capable investigator. He falls in love with Baek-mae, Iljimae's mother, at first sight and continues to love her for his entire life. He tries to commit suicide when he becomes ridden with guilt for helping Iljimae escape from prison, compromising his principles because Iljimae is the son of Baek-mae.

She was sexually violated by her master, a noble, and after she became pregnant, her baby was taken away from her before she could even give him a warm motherly hug. Then she was banished from the noble's household and for most of her life, she yearned to be reunited with her son Iljimae. She throws away the jewelry that her master gave her to buy her silence and becomes a court lady in the palace. Though she is from the servant class, she learned how to read and write by watching the privileged children learn the alphabet. She writes poetry. She has inner beauty as well as beautiful looks. That is why Koo Ja-myung became attracted to her and pledged his undying love to her. Though she sets strict limits on what she will tolerate in a relationship or friendship, she has a warm heart but keeps that side of her under wraps most of the time.

Kim Ja-jeom, a man who conspires to overthrow the government. / actor Park Geun-hyung

Secretly working for the Qing Dynasty, he steals state secrets and hands them to his Chinese handlers. His dark ambitions for power and wealth make him a dangerous foe. His plans are thwarted by Iljimae time after time and he vows to vanquish his younger but formidable adversary.

- MBC has the copyrights to the original comic book.

- The director of this drama is Hwang In Roe who directed both Goong and Goong S.

- The title was changed from "Iljimae" to "The Return of Iljimae" to avoid confusion with the SBS version.

- Drama will be filmed in Japan.

The Return of Iljimae Trailer