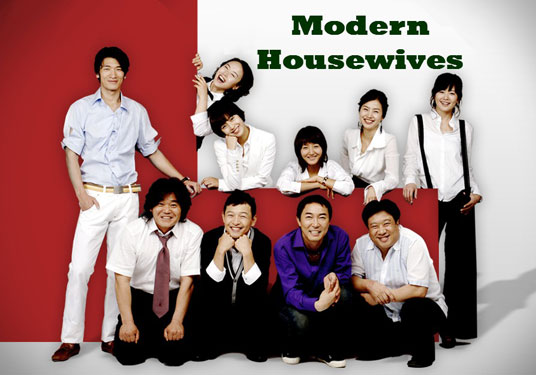 Present... A wife who earns a lot of money, makes smart money investments, and looks gorgeous. She must be good at housekeeping, raising and educating children.

These days, you hear women saying 'Gosh, it's such a tough world out there.' Social pressures are a big burden for women... Come on, let's stop now. Let's make one another feel more comfortable. Stop comparing your wife with other wives by saying, 'So-so’s wife does this so well, how come you can't be more like her?' Or else, everybody will eventually explode, leaving everyone unhappy.

Let's relax a little. Why do you want to do everything that others do? Let's change this rigid society. Stop trying to get something better than others. Stop being so greedy and selfish. Instead, let's open up and create a better place for everyone.

She grew up as the only daughter of a single father. She has always dreamed of growing up to become a perfect housewife. She grew up with proper aspirations, with a strong belief that 'you always have to be true to yourself. 'During her college years, she met Huh Myung-pil who was the President of the college singing club. Ever since that time, she wanted to become his wife. 'I will become the perfect wife for him. 'After marrying Myung-pil, her responsibilities as a mother and wife grew bigger and bigger. She considered her husband to be an amazing man. Although he is now quite successful in society, at home, he provides no emotional comfort to her.They have more arguments. Her husband offers no emotional support as he experiences more stress from work. At the same time, her resentment for him begins to grow inside her heart.

He was considered a genius ever since he became the top student in his elementary school. He entered Seoul National University's Law Department with the highest KSAT score. He was the first person from his working class family to go to college. He has strong leadership skills and a generous heart. Wherever he goes, he's a leader who has a lot of knowledge on wide range of topics. He's also an outdoorsman who knows how to have a good time. Despite his positive characteristics, he flunked the bar exam.Therefore, to avoid being a burden to his parents, he became a newspaper reporter. He gave up his dream of pursuing the most sought-after girl in school, Tae-ran, and then started dating Kuk-hee. He thought that he had settled into a comfortable life until life threw him a curveball. Life to him has become boring and frustrating. That is, until Tae-ran appears in his life again.

Grew up in Kangnam, one of the richest neighborhoods in the country. Went to a top middle school. After graduating from a foreign language high school, she entered Seoul National University's Law Department. Her beauty adds to her intelligence, making her the most popular girl in school. Whether it is married or single men, she is the ideal wife that all men desire. She is the perfect potential wife. She is a famous writer who is still single. She's fashionable, sexy, classy and smart. She is always at the center of attention in any group of people. She used to date the president of a singing club, Huh Myung-pil, in college. After Myung-pil pursued a career as a reporter instead of the bar exam, she was disappointed in him and left him. Now, Myung-pil is living with Kuk-hee after marrying her.Even though she grew up with everything she could possibly ask for, Tae-ran feels emptiness in her heart. She befriends girls at the Midal Nightclub at the beach. She is also an English tutor and teaches children who live in Kuk-hee's apartment complex.

His father was a diplomat. He grew up in Italy, the US, Japan, and Africa. He is a free spirit whose family was very wealthy. He is cool and popular with all the ladies. As everyone envies his lifestyle, he meets the lonely Kuk-hee. As she talks about how much she values her family, he sees her loneliness and sympathizes with her misery. He suddenly feels a burning passion to ease Kuk-hee’s emotional pain.