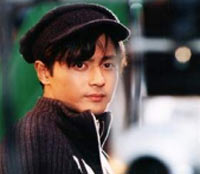 A very complicated story on models.

All spend a lot of hard work learning how to catwalk. Even Won Bin is roped in as an extra in the first scene in the first episode. He enjoys working with so many seniors. But many fans curse and swear when watching the serial because they thought that he is one of the leads! They are tricked!

It gives insight on how models work. I never know that they have to work so hard to lose weight. But the make-up on all the ladies are terrible "is dark purple lipstick the in-thing in Korea in the 90s". All seem to adore it so much but it is a torture to me as they look like vampires!

Jang and Han become good friends after this serial. They are as close as brothers. Han even advises him to take up "All About Eve" so that they can be together again. The "All About Eve" producer is overjoyed but also stunned by how much both have changed in gaining weight so he changes their ages in the serial to early 30s. Both are no longer that young and thin although they try hard to lose weight.