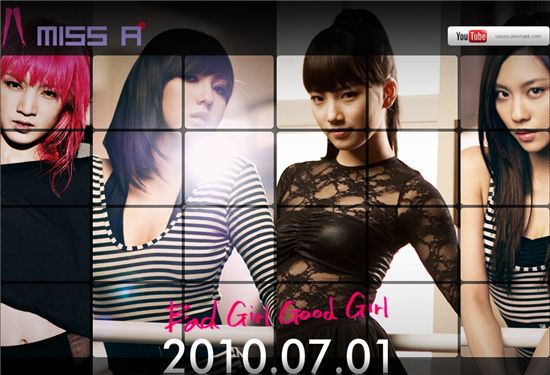 
The official website and video channel for new girl group miss A have opened, according to JYP Entertainment (JYPE) on Tuesday.

A press release from JYPE announced that the girls' website is available at www.aq-ent.com and the video channel site on YouTube channel at www.youtube.com/missa.

The website unveiled official photographs of each of the four members for the first time ever while the YouTube channel revealed three videos including a promotional clip and two music videos for their Samsung Anycall [Korean telecommunication company] campaign in the greater China region.

Composed of members Fei, Jia, Suzy and Min, the group was discovered and trained by JYPE and will be managed by the agency's sub-label AQ Entertainment.

They will be making their debut on July 1 on Mnet's televised music program "M! Countdown."