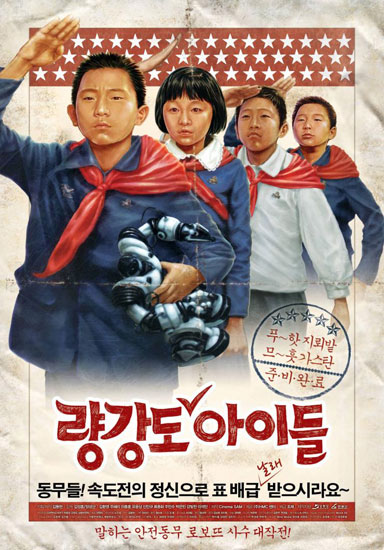 Ryang Kang Do, Sam Ji Yeon Gun, Bo Cheon Ri. In this village live poor Jong-soo and Jong-seong with their widowed mother. Jong-soo is fourth grade the Bocheon-bo In-min school and is very cheerful and adult-like. His dream is to go to Pyeongyang. However, despite his activeness, Jong-soo despairs at the fact that children with an unfavorable appearence like him can't enter Pyeongyang.

Having decided he will go to Pyeongyang, he strikes a bonanza. He picks up an ad balloon that came from Seoul to North Korea last Christmas. The children who saw Jong-soo's present go crazy at the santa outfit and robot, and pack a bunch of their stuff and all gather in Jong-soo's house. Even Jong-soo's brother Jong-seong who was in the hospital for malnutrition seems to be getting better with the appearence of the robot. The children who are wearing the santa outfit become a speciality. All the jealous children start begging their mothers for the same kind of robot...