Match made in Heaven 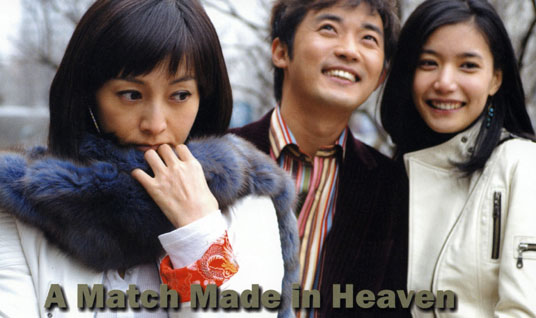 For MBC Photo Gallery from this drama : http://www.imbc.com/broad/tv/drama/destiny/photo/index.html
Brief Synopsis

Here is a couple who started off as the luckiest couple in love. Well, they thought they were... But soon that "luck" comes to an end and these two seriously start to take this "luck". Was it really a "luck" or just a "blank" after all?

Th woman shouted for joy when she met him. Dashing and good looking, he was even 5 years younger than she. And he thought he made a great coup when he met her. Sexy and beautiful regardless of age, she even boasted economic power with a stable job.At the beginning, everything was that picture-perfect. But again as there always comes a close to every beginning. That once perfect woman turns into a just ordinary married woman and also, that young prince charming now seems like a bum eating the bread of idleness. One day..she wakes up and shouts out, "I also know how to get angry! And I'm not going for divorce!" It's strange how their perilous marriage life is maintained even though they know that they are both having affairs.

"I pin all my hopes on love!" Born in a wealthy family, she has never in her life worried about money troubles. What's even more, she was gifted with a perfectly pretty face and has lived all her life like a princess ever since. At the age of 36, when she marries her brother's handsome friend who is 5 years younger, the world seems ever so brighter and perfect. On the wedding day, she definitely felt her friends' envious eyes and thought "God, am I lucky~!" But, was she really...? Now a successful director at a home shopping channel but with an incompetent husband at home, she slowly gets used to the harsh reality. She stopped going to beauty salon for make-over and now does her hair herself. In the end, herbeauty also declines and her husband now begins to turn away from her. One day, he comes home with a bouquet of roses and long hair belonging to a unidentified woman. And a mobile SMS message that says, "You must be tired of living with that old lady. You know I love you, honey..." She sits in front of the mirror. "Huh, I still look great! How dare you have an affair when a woman like me is here?" Her transformation and new make-over begin...

Born in a ordinary middle class family, he manages to graduate from university and somehow gets to work at a bank. However, unable to hide his playboy nature and his good looks, he goes on leading a life of an out-and-out libertine. His life did not seem to change a bit until he met the daughter of his VIP client, who was also the elder sister of his friend. She is rich and gorgeous! Overflowing with smiles, she seems like the perfect person who will now make his life happy. And this woman says she will marry him! But now that he's married to her, he is miserable. That gorgeous woman who he thought would never change is now just an ordinary woman. Besides, slowly now he's getting tired of his mother-like wife"I need a young and cute girl." His secret affair begins...

I have fun teasing my sister-in-law. He is a brother of Jong-Hee, and just started business with Seok-Goo for a game company. Also, he is an energetic old bachelor. He often run after women, and wastes his money on useless things. He doesn't want to lose his freedom and hobby. His ideal type is a pure and glamour girl, so his friends consider him as a hopeless guy. He is always interested in his sister and sister-in-low, and he makes himself a fun through teasing his sister-in-low. Meanwhile, he found that Seol-Goo has been unfaithful.

She's a shopping host at a home shopping channel. She's an active and daring girl. No, she's too daring that she can be too bold sometimes. She really represents the super new generation indeed. Right after graduating from university, she has entered this shopping channel and works very hard. But without fail, she does all sorts of activities like skating and snow boarding every weekend. She just can't stand a moment of immovability. Her goal is to enjoy life and one of hers ways to enjoy life is dating. She's not picky in her dating partners. Moreover, considering dating as a challenge rather than love, she feels delight in making the haughty and arrogant men into her "slaves". Two-timing and double dating are not something new to her. And now this girl, full of such confidence, wants to feel some thrill in dating. She starts going for married men as well and there comes Seok-Goo...

Match made in Heaven trailer