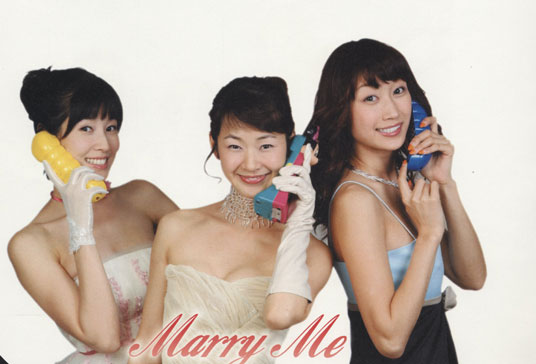 For MBC Photo Gallery from this drama : http://www.imbc.com/broad/tv/drama/wantwedding/photo/index.html
Brief Synopsis

These days, there seems to be just too many single working women in their 30's. These women have spent all their years accomplishing their dream and now stand all alone. They turn to men now hoping to settle down but all the fine guys have been snatched away by young girls who were only concerned about getting married. Now they try to fall into self-hypnotism that they are better off than being trapped in an unhappy marriage but they can't help feeling being all alone and lonely. "Marry Me" is a story of how women in their thirties come to face with life and discover something new about their lives.

30 year-old spinster reporter Sin-Young was once called a "troublemaker reporter" but she clenched her teeth and kept digging into her work. Finally all of these efforts were rewarded with a prize for getting a scoop. As every dog has his day, she also gets hers and is offered an audition for news anchor. But again, her destiny doesn't leave her in peace and brings her the news of her long-time boyfriend's betrayal. He leaves her to marry a girl 12 years younger than Sin-Young.Soon-Ae, a 30-year-old stewardess, is the breadwinner of her family who supports her ailing father, a utterly hopeless widow aunt and another hopeless cousin. To her, her family comes first before anything else and this scares all the men away. There was one man who didn't leave her but he was only taking advantage of her company card that gives discounts to luxury goods. One day, she bumps right into her boyfriend with another woman on the very spot and in enormous rage, she beats him up. Very soon she's introduced as "the Crazy Crew" worldwide and she gets fired.Seung-Ri is renowned for her numerous love affairs. Hiding this splendid past, she marries a man of a plutocratic family and goes to New York. She proudly returns to Korea to give birth to her baby. Then, she shocks everyone when her baby turns out to be white. She gets kicked out from her husband's family as well as her own parents. The source of this misfortune goes back to when she tried to get back at her playboy husband by also having an affair. Though it was only a one night stand with an American guy, she now can't turn back the time. What's more, she hears that her baby died as soon as he was born. From then, she starts her life again in Seoul with her friends Sin-Young and Soon-Ae.

She's a reporter at a press division in a broadcaster. She's a lovable and jolly person who looks strong but inside she's in fact a sentimental softy. After numerous episodes, she finally gets a prize for getting the scoop as well as her excellent covering. She even gets an audition for the news anchor position and her life seems to blossom but this moment of happiness doesn't seem to last long. Her long-time boyfriend says her good-byes and this seriously affects her to the point where she ruins her audition, thus losing the chance to be an anchor woman. Gloomy days follow and she even gets piles. Then, she hears that her first love from childhood Joon-Ho has returned from the States and he's now a doctor. Yes! She shouts out with joy. Piles get worse and she goes to the hospital but she doesn't expect her doctor to be Joon-Ho.

She grew up with her ailing father , her witch-like aunt and little witch cousin. She's the sole breadwinner of this family. She's such a warmhearted sweetheart who is willing to do anything for her friends. She's busy living her life as a stewardess and happily engaged to her boyfriend. One day, she catches her boyfriend with another girl right on the plane and beats him up. As a result, she gets fired and rejected from every airline company. She can't just sit at home. She's got to make money to pay for her father's hospital expenses. Her aunt even secretly invests Soon-Ae's entire retirement grants in the stock markets and loses every penny of it. She is just desperate to earn money and make her living on her own. As she's always there for her friends, she is the one helping Sin-Young and Joon-Ho to get together. One day Sin-Young and Joon-Ho get into a serious quarrel and they declare a break-up. Witnessing this scene, Soon-Ae tries to get them back together and in this process, she kisses him in a drunken fit...

Growing up in a wealthy and care-free environment, she's got everything she wanted. Her life has always gone the way she wanted. She doesn't care what people think of her, she just speaks out whatever she wants to say whether it hurts people or not. She has also lived in New You for some time when she was young and this is why she's so fluent in English. Books were never part of her interests and she has spent her complete 4 years of university in dating men. She marries a rich man and together goes to New York. A few years pass and she returns to Korea to give birth. And her baby turns out to be white with sky blue eyes! She only had one night stand with some American guy but never expected to have a baby. Her husband and his family as well as her own parents drive her away. Now she's got to live on her own...

He's a proctologist. He seems like a good-looking and nice guy but he's in fact the national snob. His first love was Sin-Young who was his classmate in elementary school years. His dream then was to marry Sin-Young. He then got transferred to other school when he was in 5th grade, thus losing contact with Sin-Young for 20 years. His father's business went bankrupt and his family went to live in the country side. He graduated from medical school in province and now lives in Seoul alone. He dreams of marrying a rich girl so that he can set up his own private hospital. His first love Sin-Young comes knocking on his door after 20 years but he's no longer interested in her. He only aims to get famous by using Sin-Young's broadcasting network which will also enable him to meet some big star actresses. In other words, everything he does for Sin-Young is for his own sake.