Man of the Vineyard 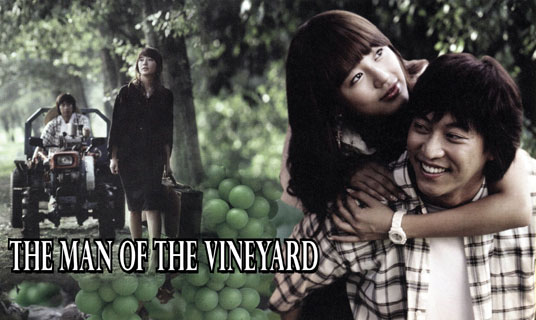 'The man of the vineyard' is a comic story about a girl from a big city who moves to a village to make money for starting her own business and meets there a guy working in a grape field. Dreaming of setting up her own apparel firm, Ji-hyun one day receives an alluring offer from her relative who promises her to leave a big grape field when he dies if she works in the field for a year. At first, Ji-hyun insists she will never in her life work on a farm, but eventually ends up becoming a farmer because of her ever complaining mother. Ji-hyun decides to try her best to achieve her dream of becoming an entrepreneur by inheriting the grape field, but being a farmer turns out a challenging task. To make things worse, the guy she meets in the village, Taek-ki, keeps driving her crazy. However, after many twists and turns Ji-hyun adapts to rustic life and opens up to the warmhearted residents of the village as well as ends up falling in love with Taek-ki.

Lee Ji-hyun:Ji-hyun is a girl from a big city who moves to a rural village to earn money to start her own business. She adores money as the standard of everything in life and the sole purpose of living. But that doesn't mean that she recklessly pursues windfall profits. This upbeat, a bit indiscreet yet talented girl has a good sense of style and dreams of creating her own apparel brand someday. She drinks espresso only in high-end coffee shops and takes club dance classes to be at her best when she goes clubbing. Albeit audacious and unabashed on the outside, she has a pure heart deep inside.

Chang Taek-ki: A mysterious rough-looking guy from a rural village, Taek-ki works in a grape field, helping his grandfather in everything. His grandfather raised him and even sent him to college after Taek-ki's father, who took care of the grape field, died in a car accident when Taek-ki was in high school. Taek-ki even broke up with his girlfriend after graduating from college to pay his grandfather for everything he has done for him.

Kang Su-jin: Taek-ki's ex-girlfriend, Su-jin comes from a noble family and looks elegant, sophisticated and intelligent. She drives a luxury car and wears luxury clothes, and currently works as a senior food researcher. She went to study abroad after Taek-ki turned down her offer to go together and returned to his hometown after graduating from college. After she comes back to Korea, she attempts to make Taek-ki move back to the city by scouting him to her research center but as Taek-ki keeps refusing to leave his hometown, Su-jin launches an organic wine production project and visits Taek-ki's farm along with grape and wine experts. She even sets up a container near his farm and vows to stay in the village forever unless Taek-ki agrees to go with her.

Kim Kyung-min: Kyung-min is a guy Ji-hyun used to love one-sidedly years before. He has a good sense of humor and style and good manners. Ji-hyun met him at a college club and fell in love with him at first sight, but her efforts to captivate his heart failed to change his feelings for his pretty girlfriend he was dating at the time. But years later Ji-hyun learns that Kyung-min works for a public healthcare center in a small village and is still single but looks even cuter than before. He lives in a cozy cottage room because of his status as a village doctor and exercises every single day to keep in shape. He is also a meticulous and careful doctor.

Man of the Vineyard trailer