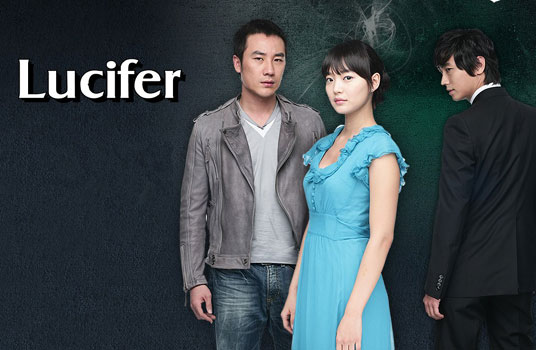 'The Lucifer' is a story about two men who were predestined to confront each other over a tragic incident that happened when they were young, and a woman who has psychometric powers. Through the bitter fight of its main characters and their desperate attempts to uncover the truth, this drama attempts to find answers to such questions as what is good and what is evil, and how good and bad fortune are formed.

The murder case that begins with an afterimage of one girl is completely ignored and closed quickly because of the girl's preposterous testimony. Twelve years later, detective Kang Oh-soo (played by Um Tae-woong) receives a taro card meaning 'judgment' and a letter. A brutal game begins between the culprit and the victim of the case, which began as a trivial incident 12 years ago but has snowballed into a big tragedy, and a mysterious witness.

Kang Oh-soo:The second son of a rich lawmaker who owns a deluxe hotel, Oh-soo is a serious crime detective who spares no effort to catch criminals. A troublemaker in his teen years, he shocked his family when he said he wanted to become a detective after graduating from high school. Having an outgoing personality, Oh-soo is ready to help his coworkers anytime. But he tends to offend those he cares about because he is not good at expressing his feelings. However, deep inside he is a caring person, and has his wits and unswerving desire to win.

Seo Hae-in:A psychometric, Hae-in currently works as a librarian. She is talented at drawing and is an outstanding taro card reader, but she only does that as a hobby. Her forgetfulness has almost reached the level of amnesia, but her ability to concentrate is stunning once she engrosses herself in something. Having an unsuspecting personality that is often perceived by others as 'weird' because of her poor communication skills, she nonetheless knows how to face hardships head on and turns into a courageous and strong woman when necessary. Her father died three years ago of liver cancer, and currently she lives with her deaf mother, which explains her habit to use the sign language whenever she is angry or lacks words to express her thoughts.

Oh Seung-ha:An exemplary lawyer who always smiles, Seung-ha is an 'angel' who volunteers to provide his professional services to underprivileged people and at the same time a coldhearted 'villain' who reenacts and masterminds murders according to his own verdicts. He never went to high school but instead obtained his high school diploma through qualification exams and passed the bar exam with honors at age 25. His contradicting personality -- warm and gentle looks vs. a cold heart -- is like a sharp piece of glass hidden in a soft blanket.