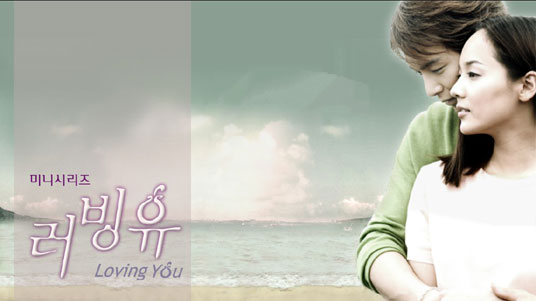 'Loving You' is a young love story set in Cheju Island. Da-lae is a strong girl who became the head of her family after her father’s death and after her mother collapsed from a heart ailment. Feeling guilty after the death of a friend, Hyuk works as a laborer in an orange growing farm while concealing his identity as the heir of a Chaebol. Da-lae and Hyuk overcome all kinds of obstacles that lie in front of them but suffer a setback when they realize that they are from two totally different worlds. However, Da-lae is a girl who doesn’t feel ashamed of her poor background as the daughter of a clamshell-diving worker, and feels she can confidently love the person who saved her despite his shabby appearance. Also, Hyuk proves to be a venturous young man who can boldly choose his life and search for his dream. Da-lae and Hyuk do not forget their feelings for each other during the storm that passes through their lives. These two people meet at sea during a storm and save each other. And the frame bar that Da-lae kept with her since that storm brings them together again. Da-lae realizes the fact that the person who rescued her one year ago is Hyuk and Hyuk realizes that the person who rescued him one year ago was Da-lae. Their love grows afterwards.