Love me when you can 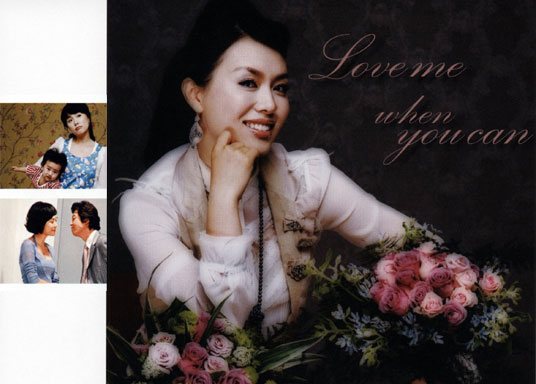 
What is the happy life that women dream of ? How can we define true happiness and success desired and pursued by women ? Despite drastic increase in divorce rates, there are still countless women going through divorce in the shadows, facing so many problems.Through the main character 'Oh Sun-ae', this drama series narrates in detail the aftereffects and the wounds accompanying divorce.The greatest victims of emotional divorce and irresponsible love that are neither pragmatical nor realisitic, are none other than our own children.

Korea is said to be a country with the second highest divorce rates in the world. But in terms of divorce process or this emotional warfare, we have only been outwardly influenced by the western culture, and perhaps no one has treated the children of the divorcing couple as individual persons.

This drama intends to show that divorce signifies the end of a marriage, not the end of the relationship with their children.

Becoming pregnant right after graduating from college, Oh Sun-ae married the baby's father without having the opportunity to work professionally even for a day. Living as an ordinary at-home wife and mom, she has faithfully served her husband, her 10-year old daughter and her in-laws for 13 years. Sun-ae lost her first child, and has lived with her in-laws without a word of complaint. She cared for her bedridden father-in-law (he has since died), married off an older spinster sister-in-law (she lives in another country), and played servant to endlessly visiting guests. Buried under housework, her life has been restricted to the boundaries of her home without any opportunity to enjoy a decent outing.Being of a naturally bright, kind and generous disposition, she doesn't have much complaint and considers this life as her own kind of happiness. Then she discovers that her husband has been having an affair with another woman for over a year. She can understand and endure any kind of situation confronting her, but cannot forgive her husband's betrayal. Literally loosing her senses, she divorces her husband without giving any thought to the consequences. But that's when the real problems start!Let alone gaining the custody rights, she is sent out into the streets without a penny of divorce settlement. She has no one else to turn to but her younger brother. Sun-ae realizes that she should have looked for a job and examined all possible consequences before getting a divorce, instead of acting rashly with rage. But it was too late.She ends up moving into her brother’s house, and starts to search for a new transitional point in her life. She meets her new fate in the name of Kang Jin-wu. She also starts a business together with her brother who has lost his job, and succeeds in becoming a proud woman of independence.

His young daughter is particularly serious, and acts as a cause for their initial conflicts. Dong-gyu truly gets back all the cruel things he did to Sun-ae. Ultimately, he divorces Yeong-jo, and ends up penniless.

The man Oh Sun-ae feels new affections for after her divorce.Kang Jin-wu befriends Sun-ae when she comes to consult him about her daughter's psychological problems.A graduate of Yale University, he is a gentle and kind Child Psychiatrist, who harbors a deep and painful wound in his heart. He married the woman he fell in love with while studying in the US, but he lost his bride to a car accident on their way back from their honeymoon. So legally he has never been married.

He went to the same high school as Sun-ae's ex-husband, so he could be considered as Dong-gyu's friend, but they had never been close. Because of Jin-wu's strong background and outstanding intelligence, Dong-gyu always felt inferior, and they had different circle of friends. But when Dong-gyu finds out about Jin-wu's relationship with his ex-wife of all people, he becomes really agitated by it. Such attitude is another reason for conflict with Yeong-jo, and a complicated triangle with Dong-gyu and Sun-ae develops.In the end, Jin-wu is the man who helps Sun-ae find happiness again.

Career woman with a stylish and sensual appearance. She is having a passionate affair with Oh Sun-ae's husband Ha Dong-gyu. A realist who never stands for personal damage, she meets Dong-gyu while selecting an advertising model for his company, and falls in love.

She does not pester him to get a divorce, nor does she feel the need for a marriage. However, she quickly marries Dong-gyu as soon as he gets a divorce, and realizing that he does not want to pay settlement to Sun-ae, she engineers him to rip his ex-wife off.

When her life with Dong-gyu becomes uncomfortable, she ruthlessly ditches him, and makes him and his family experience the very same situation that Sun-ae had to go through before.

As a child, Yeong-jo's father deserted her and her mother for another woman, making her harbor subtle hostility for mankind. She harbors simultaneous animosity for first wives, whom she considers to be stupid creatures, and for empty desires of man. This is the result of psychological wounds suffered during her childhood.