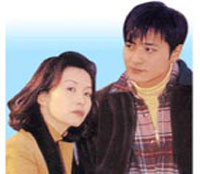 Young-Ji is a widow in her mid-thirties. Her husband died a few years ago in a car accident and she alone raises a daughter. She is a photographer taking pictures for the brochures of enterprises. Joon-Seop is her boy friend who has loved her for more than ten years but somehow could not marry her. As soon as Young-Ji's husband dies, Joon-Seop divorced his wife and comes close to Young-Ji again. It almost seems very natural that they get married this time.

Joon-Seop is an automobile designer and among his men is a young man called In-Ha. In-Ha is in his twenties. While Young-Ji was working for Joon-Seop's company, she has chance to meet In-Ha. In-Ha falls in love with Young-Ji at one moment of seeing her not knowing that she is the girl friend of Joon-Seop. Young-Ji also is attracted to In-Ha's pure loving heart, but when he actually says "I love you", she is miserable not knowing what to do. She knows that she can not accept his love but she is surprise to see herself reluctant to say "no" to him. To forget In-Ha, she accepts Joon-Seop's propose and decides to marry him. Meanwhile she goes to the doctor for she has a constant pain in her stomach. When the doctor tells her that she has a cancer tumor and she has only a few monthes left to live, her heart struggles with a strong urge to live. She knows that it is because of In-Ha, rather than Joon-Seop. She makes up her mind to be true to herself and accepts In-Ha's love. But their happiness does not last long. She soon dies in his arms.

Even after her death, In-Ha can not erase the memory of her out of his mind. He thinks that he can not fall in love ever again. A young and bright girl joins to work in the automobile company where In-Ha works. At first, she appeared to be an arrogant type of girl,after all she is the rich girl but once she falls in love with In Ha, he slowly change her characters and views. She is the daughter of the boss of the company and people are envious of In-Ha that he would get everything: the girl and the company. There is also one young man who like the chairman daughter hence making trouble for In Ha as he knows the chairman daughter heart for In Ha. There is also another girl who happen to be a sister of In Ha good friend and working together with her brother in a car workshop.

However sick and tired of the intrigues and struggles of the rich people trying to get hold of the company, he leaves them all, including the daughter of the enterprise. Leaving all the world of ambition and success behind, he looks for the girl working in the car service as he has promised to her brother to take care of her.