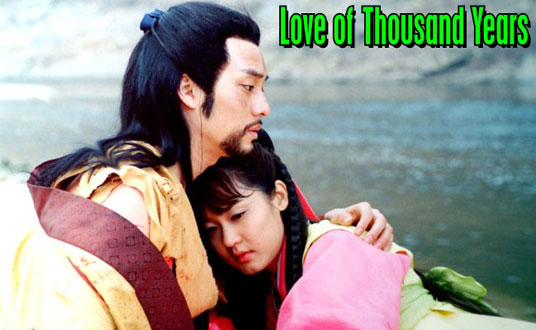 Love affairs during the dramatic fall of Bakje dynasty

It was about 1,400 years ago. The story revolves around Princess Buyeu Ju, the daughter of last king Eui Ja, general Ari who attempts to reconstruct Bakje for the love of the princess, and general Yu Suk Kim from Shila who’s after them.

It portraits love and action during the dramatic fall of Bakje dynasty. Princess of Bakje ‘Buyeu Ju’ comes to the modern soceity in 2003 and meets ‘Inchul Kang (Ari)’ and ‘Hujiwara Tasuji (Yu Suk Kim)’ who have no idea of their past lives and creates love fantasy that overcomes time and space.

By bringing back the forgotten princess, the drama lets us to look back at our history restoring pride. It avoids monotony of modern drama that emphasizes only reality and adds imagination which is the core characteristic of fiction to create an interesting fantasy drama consists of romance(70%)+comedy(20%)+historical element(10%).