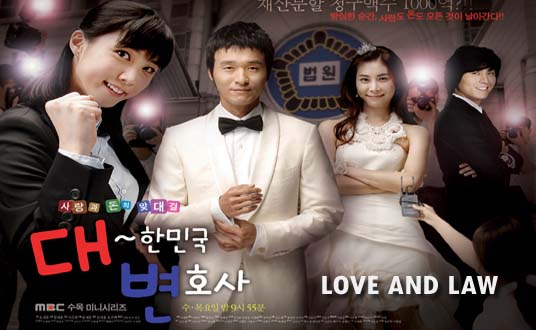 "LOVE & LAW" is a tale about a man involved in a divorce lawsuit, and his lawyer's attempt to salvage his money and love. The story includes an exciting turn of events when romance is found during the process of the lawsuit.

Woo Lee-kyung worked at a major law firm as a secretary when she fell head-over-heels in love with Byun-hyuk, a rising star attorney in the firm. They fell madly in love with each other and ended up living together for three years. However, one day, Byun-hyuk decided to leave her, and all she had left were his law school books. The despaired Lee-kyung studied day and night with Byun-hyuks books, and soon passed the bar exam herself. Lee-kyung ends up opening her own tiny office with no employees. Her first task is to represent Han Min-kook, who winds up in a huge divorce lawsuit that could cost him an incredible sum of $100 million dollars. This case also lands Lee-kyung in a funny, cute tale of romance. Meanwhile, the story takes an odd twist when it is discovered that Han Min-kook's ex-wife, Lee Ae-ri, is Lee-kyung's good friend, and the lawyer representing Ae-ri is none other than Byun-hyuk himself. At the end of the day, Lee-kyung is left with the challenge of facing a showdown with her friend, Ae-ri, as well as her first love, Byun-hyuk.

CEO of Independent Financial Group (Investments & Securities Brokerage). A genius in investments. He is a friend to money, but a foe to the law. Min-kook is like a beast that can never be tamed. He is also a rising star in the financial industry who even holds a fund under his name. Min-kook was at the center of the spotlight when he married a superstar actress six years ago, and he made millions while he was married to her. Although he invested in everything that was profitable, he failed to invest in his own wife. During the marriage, he was involved in several romantic scandals. His wife finally had enough and filed for divorce. The two had a seemingly simple consensual divorce. But before Min-kook had time to catch his breath, he received some unpleasant news. His ex-wife is now asking him to divide their assets through her lawyer and is demanding $100 million dollars. Was getting married such a risky investment in life? He just can't seem to understand the answer to that question.

A lawyer new to the legal world. During the six months of her career as a lawyer, she has only had three cases entrusted to her. Unlike most lawyers, her heart moves faster than her head, and she can never turn a blind eye when she witnesses injustice. After finishing high school, she was hired as a secretary in a large law firm called "Daebo."There, she fell in love with a new star lawyer and ended up moving in with him. One day, he coldly leaves her, and she digs into his law school books that he left behind. After a while, she passes the bar exam and finally becomes a private lawyer in her own tiny office. She hardly has any clients, and all the cases she handles are divorce-related. One summer night, when the entire nation is going wild watching the Olympics, Han Min-kook opens the shabbiest legal office in town.

A beautiful actress who left the entertainment industry upon marriage when her career was at its peak. Ae-ri is Han Min-kooks wife and high school buddy of Woo Lee-kyung. She is also the fashion icon of the century. Even a grocery bag becomes the "it bag" when she carries it around. Six years ago, when she was passionately proposed to by a young man, she left her career without any regrets. She was indeed in love with Min-kook, but to her, marriage was the safest investment she could ever make in her life. But her marriage turned out to be a very lonely one. After six years, she ended it all and filed a huge lawsuit. The amount was $100 million dollars, a figure that was unheard of in the history of Korean divorce courts! Thanks to the prenuptial agreement that Min-kook signed and quickly forgot about, she now has a 100% chance of winning this case. At first, she thought of filing for $50 million, but thanks to her competent lawyer Byun-hyuk, she changed her mind and raised the figure all the way up to $100 million dollars. Thanks to her hotshot lawyer, she can finally retrieve her wings to soar again. Will she be able to fly and land in her new dream life through this lawsuit?

Byun-hyuk was a famous divorce court lawyer in the US and was scouted to the large law firm Daebo in Korea. He is the ex-boyfriend of Woo Lee-kyung who he coldly left six years ago. He is a smoothtalker, and loves to joke around unlike most of the other lawyers. Thanks to his smoothtalking, he can easily lure ladies and judges. He is also slick in luring his clients. When the secretary he dumped six years ago returns to his life as a slightly lacking but passionate lawyer, he finds her attractive all over again and does everything to lure her back. But things do not seem as easy as they were six years ago. He knows how to draw the line between his private life and business, so when he learns that Lee-kyung is representing Min-kook, he laughs to himself thinking that this is going to be an easy, slam dunk case. Meanwhile, when Lee Ae-ri begins to lean more and more on Byun-hyuk, he is suddenly tempted to break his own rule of never dating clients.

The Lawyers of The Great Republic Korea trailer