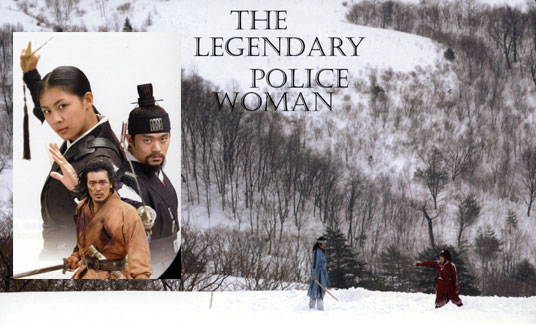 For MBC Photo Gallery from this drama : http://www.imbc.com/broad/tv/drama/damo/photo/index.html
Brief Synopsis

Long time ago in Korea, during the time of Cho-Sun Dynasty, there was a group of women called 'Da-Mo'. 'Da-Mo' is the name of the job meaning the police woman. 'Da-Mo' was regarded as the low class but they had the privilege to investigate lady's private room and interview the ladies of the high society where no man could approach. Da-Mo's who are working in the Palace were even exposed to the undergoing political intrigue.But Da-Mo, being the low class and women, they were treated no better than the humble servants in the society. They were not free from the suffocating society full of prejudice on class and sex. This drama depicts one life of Da-Mo named Chae-Ok. She possesses the advanced idea for living which could not be accepted by the convention of the society and this is where the touching story of this drama 'The Legendary Police Woman' comes.This Special Drama Series produced for HD TV, has been under production for 1 full year before the first air. Military Art and vast scenes of Sword Fighting will be a pleasure for eyes and the tragic love story will touch the heart of the viewers.

A 23 year-old Da-Mo. Because she has been trained with sword since she was little, she is undefeatable when it comes to the using of the sword. Having been raised in the mountain she has learned much from the nature. She is straight and honest which makes her unbearable with the lies of other people. Although courageous and manly, she can not hide her soft heart and female side when she is in front of Sung-Baek. But Sung-Baek is the one she has to arrest, not to fall in love with. And this is the root of the tragic love.

A policeman. His mother was the second wife to an honorable man and this has been his scar since he was small. He is sharp at his work but has lonely eyes and always thoughtful. He adores his people like his own brother but would not show his feeling outside. He is quick for promotion and this makes his rivals jealous. Consequently he becomes the target for an intrigue and ends up in a prison. He is in love with Chae-Ok. But they are from two different class, and his heart aches to see Chae-Ok's eyes are yearning while her sword is pointed at Sung-Baek.

He is a presiding police in the regional police headquarters, and a usually a man of few words and prudent. In contrast with Bak, Joo-Wan who makes Chae-Ok a big smile and often soothe her in her sorrow, Lee, Won-Hae gives a clue with his sharp insight and take care of her in danger.

30 years old and he is a famous for using his sword. He was adopted by a couple of lepers. He leaves the leper's town at age 15 and trains himself with sword until he becomes 23. He then gathers people to protest against the society where the prejudice on the class is asking for too much sacrifice of the people. He takes care of his people but he also has a cruel side of him that would never forgive anyone who does not share his thought. He feels himself falling for Chae-Ok but he also knows that loving her will ruin his big dream to destroy the corrupted world and to set up the new justice to the world.