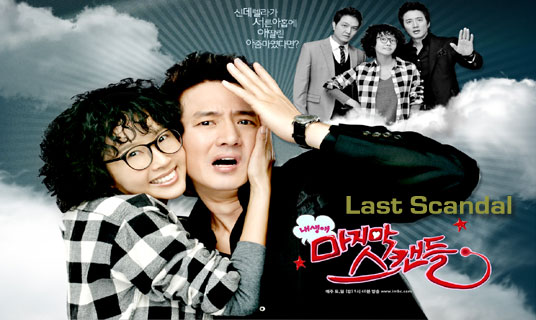 When a woman turns 39, she'll think about getting Botox injections to cover up her wrinkles that don't seem to recede well under cheap wrinkle removing cosmetics. She'll also probably need to wear a corset to tuck in her flabby stomach and bulging hips but she'll ignore such thoughts as she lives in a world where she thinks she's still a nubile teenager. This is another TV drama that is presented to middle-aged women who dream of wonderful romances. Going back and forth from fantasy and reality, this new drama, "Scandalous Affair" will bring back flashbacks of those days when their hearts fluttered when they met their first love. This drama is dedicated to middle-aged women who still dream of being reunited with their first love!

What if Cinderella was portrayed as a 39-year old woman with a kid? That's the opening scene for this drama that tries to give hope to middle-aged women - who watch teen romances to vicariously relive the good ol' days - that they can also overcome the constraints of their middle-aged lives and find true love once again. A woman who has inner beauty is called a middle-aged woman.

They've learned the wisdom of life, which eludes the youth, as they are a year away from hitting the big Four-O. They've learned that real love is looking after their families first and foremost. They're also humble and will be thankful when someone tells them that they look great. They're beautiful in every way. This drama will provide them with a solution in life that they themselves are not aware of. Women are beautiful even when they are forty or fifty simply because they are feminine beings!

In-laws, husband, daughter, and a sister-in-law who bosses her around.

I can be anything I want! "Pay off the house mortgage before I turn 40" "Track down my missing husband" "Find a full-time job instead of part-time jobs" She was raised in a wealthy family and had a comfortable life in her youth. She was known for her beautiful looks and had high standards. She was selected as the spokes model for the Asian Games among many high school candidates and inherited her pretty looks and smarts from her parents. She was a charming person who had a well-rounded personality. In her youth, many high school jocks would bring her flowers. As the most popular girl in school everybody knew her... But when her dad's business failure coincided with the death of her first loves, her life began to unravel. While putting on a brave face as a mom, wife, and dutiful daughter-in-law, she endured the ups and downs in life. Her writing talents were put to use in keeping a second accounting book to deceive her penny-pinching husband while her witty talents as a conversationalist was employed to spread little lies in order to skim small amounts of money from her allowance. All in all, life dealt her a tough hand and she transformed into a feisty, brash, middle-aged woman!

Movie star with many lucrative contracts with top brands

Older brother who is also his agent. Nephew.

He's known as a romantic man with a charismatic personality that was partly cultivated by his movie roles. In reality he is immature, talkative and a softie who likes to act childish. He was born with a raw acting talent that flows naturally from within him.

Wishes to live as he who really is - In his high school days, he was dumped by his first love, Na Sung-shil. He was dumped again by the first actress he dated after he entered show business. After getting dumped twice in life, he is thoroughly burned from the relationships he had with women. Since then, he never takes relationships seriously and keeps the women he dates at arm's length. He is committed in staying single. Currently, he is obsessed with his work. He’s been an actor for 15 years and although his image is different from who he is he does have adorable eyes and a knockout figure. His million-watt smile made him adorable to women. As the top symbol of a metro sexual type, he is widely acknowledged as a playboy in the public eye, as well as with the circle of women who he dates. He is in the paper all the time for his numerous scandals and the women keep coming into his orbit. But he hardly lets himself get too involved and is always the first one to dump his partner. This is because he's not anything like the person that people believe he is. He was voted as the cutest celebrity by winning more votes than a younger star! All of this was made possible thanks to the crafty planning of his older brother, who is also his agent. He finds it annoying to follow his brother's orders but whenever he's in a tight spot, he'll call his brother immediately for help.

Song Jae-bin's agent and head of the Future Entertainment Agency

He's passionate but also has an icy temperament. Hiding his inner sensitivities, he's rational, meticulous, aloof, and sensible. He's a realist who knows how to navigate through tight situations. Dream Start a 4D theater business and become the king of entertainment in Asia and beyond. His parents died when he was just a teen and that put him in charge of his dad's business where he also looked after his brother, trying to be like a father figure to him. He never was interested girls. So he doesn't much about women even though he is in his forties. But he did form his own notion of what women are like by reading books on the subject of the female sex. He gets involved in one situation where he develops a misogynist attitude .

She looks feminine and pure in her outward appearance. However, she’s full of ambition and greed inside.

She has a hidden lover who bankrolls her glamorous life while her goal is to sustain her stardom for as long as possible.