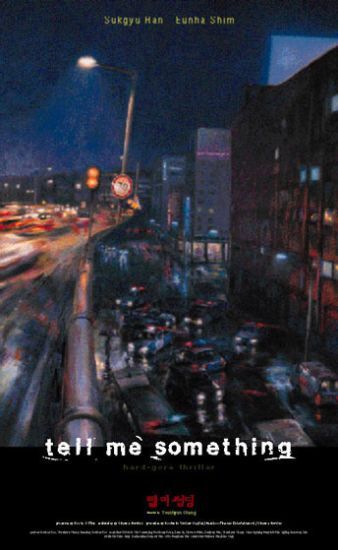 Tell Me Something is a 1999 South Korean film, promoted as a "hard-core" thriller, about a serial killer. It was an early South Korean film to find success abroad as part of the Korean Wave, and was selected to appear in the 2001 New York Korean Film Festival.

Tell Me Something is a blood soaked film, although much of the violence occurs off screen. The story begins with a detective - Cho- returning to work after the death of his mother. He is accused of accepting money from a dubious source to pay for his mother's medical treatment. He denies the accusation but his career is under a cloud and the film never definitely clears up whether he is innocent of this charge. (Although Cho does seem to allude to this to his friend, Detective Oh, which suggests he is willing to compromise legality in order to follow the higher morality of caring for a loved one.)

Detective Cho is soon put on the case of a serial killer who amputates the limbs and heads of his victims and seems to enjoy mixing up the body parts- swapping a new part into the body of each new victim. The trail of victims leads to beautiful young woman, Chae Su-Yeon, daughter of a famous painter. She was named as the next of kin of one of the victims, but it quickly becomes apparent that she knew each of the victims and had dated them in the past. Su-Yeon is an enigmatic character whose past is gradually revealed over the film as she becomes close to Detective Cho. Her only close friend, Seung-Min a doctor whom she has known since high school, reveals that in the past Su-Yeon had tried to kill herself several times. This apparent fragility and victim status is subtly picked up by a painting in her country retreat which depicts her as Ophelia drowning. The body count mounts and Su-Yeon moves into Detective Cho's apartment for safety signalling a growing trust between them. The relationship remains chaste if not quite professional with Cho acting as a protective knight. His complete trust is shown by him giving his gun to Su-Yeon and showing her how to use it.

In keeping with the tradition of serial killer films as the body count mounts the finger of suspicion moves from boyfriends and would-be boyfriends to Su-Yeon's absent father. It emerges that her father had abused her over a long period of time. It is also suggested that Detective Cho will be the next victim due to his growing closeness to Su-Yeon. Meantime, Detective Oh has found the apartment where the amputations / killings have taken place and naturally he is killed - although handily he manages to secrete a photograph which provides a crucial clue for Detective Cho to reach the final denouement. A show down in Tower Records in which both Su-Yeon and Cho survive seems to indicate a happy ending. Su-Yeon bids a warm farewell to Cho, thanking him for surviving and sets off for Paris.