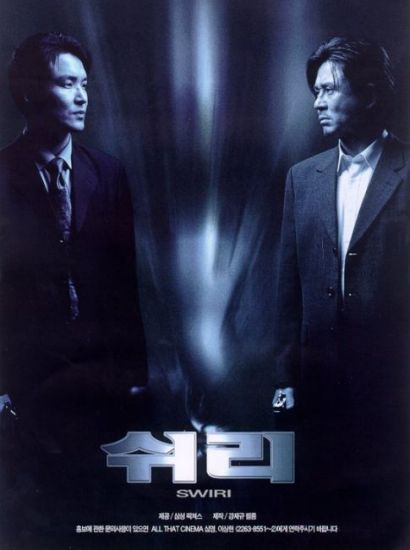 Shiri (Swiri) is a 1999 Korean film written and directed by Kang Je-gyu.

Shiri was the first Hollywood-style big-budget action film to be produced in the "new" Korean film industry (i.e. after Korea's major economic boom in the Nineties). Created as a deliberate homage to the "high-octane" action cinema made popular by Hollywood through the Eighties, it also contains a story that draws on strong Korean national sentiment to fuel its drama. Much of the film's visual style shares that of the Asian action cinema, and particularly Hong Kong action cinema, of John Woo, Tsui Hark, Ringo Lam, and the relentless pace of the second unit directors, like Vic Armstrong and Guy Hamilton, in the James Bond films.

The movie was released under the name Shiri outside of South Korea; inside Korea, the title was spelled Swiri. The name refers to Coreoleuciscus splendidus, a fish found in Korean fresh-water streams. At one point Park has a monologue wherein he describes how the waters from both North and South Korea flow freely together, and how the fish can be found in either water without knowing which it belongs to. This ties into the film's ambitions to be the first major-release film to directly address the still-thorny issue of Korean reunification.