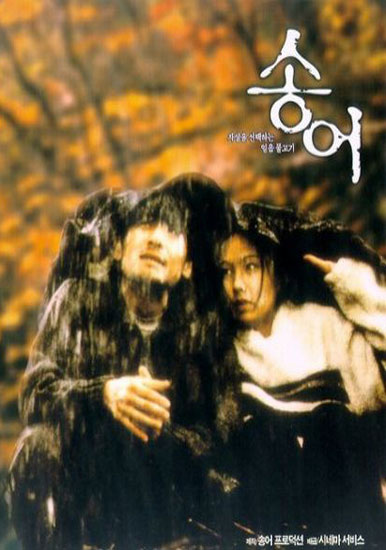 The City/Country dichotomy has been a popular motif for many a film. Korea's quite dazzling rush to Modernization provides an interesting exploration of this topic. This film begins at a toll booth out of Seoul where a group of friends, whose friendships are a result of college connections, travel out to the country to meet up with another college friend who chose vocation at a trout farm rather than the bustling city of Seoul. The fish out of water experience of the cityfolk in the country becomes quickly apparent.

The stereotypes they hold regarding countryfolk are well portrayed as transference of their own internal demons. The use of the behavior of river trout when frightened as metaphor gives this movie a depth that only subtle allusion can provide. The point isn't thrown in your face unlike so many movies that dumbdown and cut up the meat of a movie for the audience. We watch people struggle with that which they don't like about themselves and see them make choices that bring us to cringe knowing fully what's really going on. There is no acting standout here, everyone contributes equally in a challenging discussion about the effects of the either or-ness Modernism encourages.