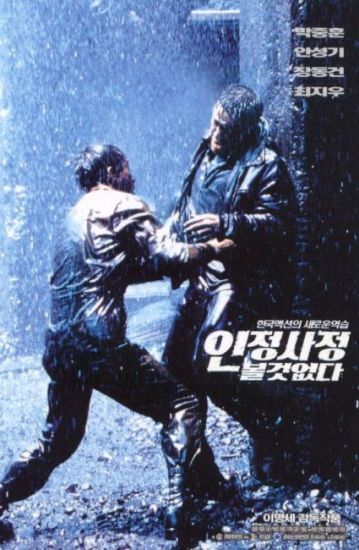 Nowhere to Hide was marketed as the Korean answer to Hard Boiled, but the similarities are only slight in that both are cop films made in the far east.

The film is set in Inchon in South Korea. The plot of the film is simple, almost formulaic. A murder is committed in the opening reel, and the cops search for the killer. We are shown the comradeship of the cops, and the aggressive, underhand methods they use to hunt their man. An old lover of the killer provides the link to the wanted man.

Opening up in monochrome but with occasional flashes of colour, the first action scene is a disorientating strobe-like affair. We revert to colour for the rest of the film, but there are still enough imaginative uses of montage, slow motion and wipes.

Additionally, there are Tarantino-esque homages to past movie greats throughout the film. The opening stabbing on the 40 steps carries an obvious homage to Battleship Potemkin, and there are also nods to films such as Taxi Driver, A Clockwork Orange and Eat Drink Man Woman. The ending is a twist on the final scene of The Third Man. Mention must also be made of the use of Holiday by The Bee Gees on the soundtrack.

Park Joong-hoon stars as the obsessive Detective Woo, a cross between Harry Callahan and Little Bill Daggett. Woo retains enough charisma however to remain sympathetic even when he is beating up suspects. There are plenty of fight scenes in the film but no martial arts. Jang Dong-gun won the best supporting actor at the Blue Dragon Film Awards for his role as Detective Kim.