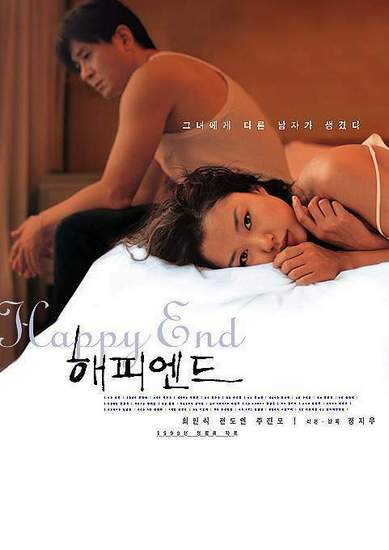 Happy End is a Korean film released in 1999. Directed by Jung Ji-woo, it's about a woman who's having an affair while her husband is unemployed.

"Happy End" is about Bora (Jeon Do-yeon), a successful career woman who becomes involved with her destructive ex-lover, Kim. Bora's home life is a snore: she's mother to an infant child and her husband, Seo (Choi Min-sik) has lost his job, leaving Bora as the family's sole breadwinner. It's unclear if Bora is with Kim just for the sex or for the passion, both of which Seo seems incapable of giving. But it seems the jobless Seo hasn't been just wandering around parks and reading romance novels as first thought; he knows something is going on, and he's collecting evidence.

Seo has been emasculated by his inability to find a job and director Chung hammers this point home with a brief montage showing Seo grocery shopping, cooking, and doing the laundry. These are all very feminine jobs, particularly in very patriarchal South Korea. Most interesting is that Seo seems content to live with the cheating Bora, very much aware of his own shortcomings, which leaves him willing to be wronged. This is, in fact, what most wronged wife feels when her husband cheats on her.

It's to the film's credit that it doesn't treat its three main characters as despicable human beings. They are all very much human in every way that matters. As a result of all of these humanly needs and wants, Bora is unable to stop going back to Kim even though she seems physically and emotionally damaged by their continued affair. Kim has realized that he is hooked on her, and is very aware of his (jealously-driven) actions toward her and her family. Without each other, they have no passion in their life, and so they must keep going back to each other.

Although "Happy End" ends rather unhappily, the film is not altogether downbeat. Director Chung Ji-woo has taken the role of observer, using mostly handheld cameras to capture the events in the lives of his 3 main subjects. The film is sexually explicit, and there is one scene of brutal violence.