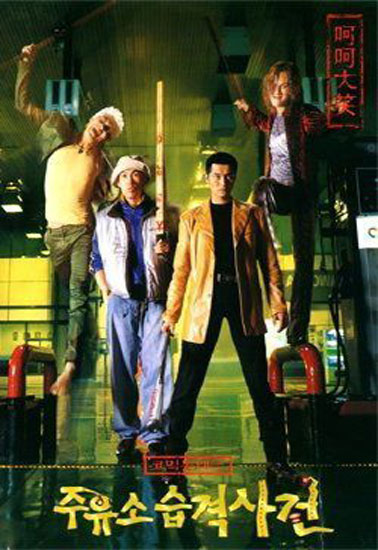 Attack the Gas Station! is a comedy film directed by Sang-Jin Kim and written by Jeong-woo Park. It was released in 1999.

The film tells the story of a quartet of thugs who rob a gas station out of sheer boredom, having robbed it only a few days previous. Unable to get any money from the register, they take everyone hostage and start dispensing gas and keeping the money. The film becomes progressively more and more farcical as the characters find different ways of amusing themselves, mostly through the mixed cast of characters that come in through the gas station. However, it's only a matter of time before they start upsetting the wrong people.

During the question and answer session at a screening during the 2000 Vancouver International Film Festival, director San-Jang Kim indicated that the film inspired real-life copycats in South Korea.

Having robbed and thoroughly destroyed a gas station in the first five minutes of the film, a group of street toughs with their own gripes against society sits in a noodle shop and out of sheer boredom, decide to rob the same gas station (as the title card reads, "Why do they attack the gas station? Just because!"). But, since the manager had the foresight to stash the money away, the four gang members take the manager and the employees hostage and then start dispensing gas to all the customers and keeping the money.

As the film progresses, a mix of characters comes through the door, not all with good intentions, but with ludicrous results. A gang of school bullies comes by the gas station to harass one of the employees for money (they end up being taken hostages, while the bullied employee ends up being forced into a fist fight with one of the bullies...and wins) The police come by demanding free gasoline (the four thugs refuse, as the police clearly aren't doing their job). A customer refuses to pay for a full tank of gas, only asking for half a tank, and is taken hostage. More school bullies come by the gas station, seeking revenge for the first fight, but then they too are taken hostage.

It's not long until they start attracting the wrong kind of attention, which leads to a violent confrontation. During the credits, four scenes show what the characters do after the events in the film.