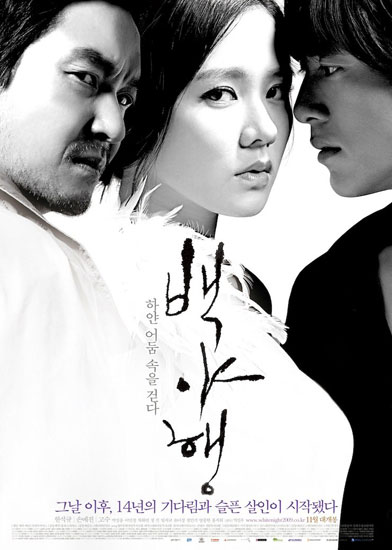 Alternative title : "Walking Through White Darkness". A pawnbroker is found murdered in a remote town in a derelict building. three people come under suspicion but all of them have perfect alibis and the investigation comes to a standstill. Almost fifteen years pass and the lead inspector decides to reinvestigate. Fifteen years earlier, the victim's son killed his father to save his beloved from being raped by him. And the girl killed her mother when she found out the boy had killed his father. For fifteen years, the boy has been eliminating anyone that tries to interfere with her life. He exists as a shadow, requiring nothing from her in return. She knows what he has done for her sake but looks away from it. As their love grows, more crimes happen. As their sin grows, the inspector's chase comes closer to them.