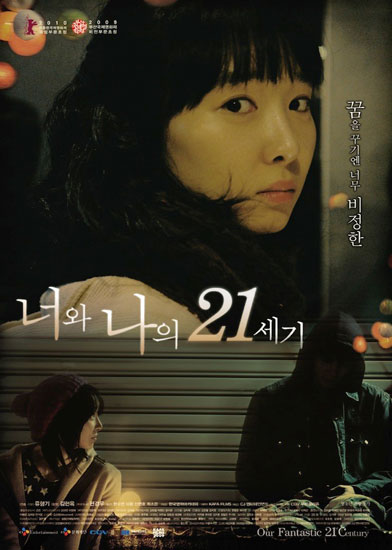 BUSAN, South Korea. Korea's fraudulent and cash-obsessed youth are at the heart of this dead serious, ironically titled drama "Our Fantastic 21st Century," about the so-called 880 Generation, referring to the demographic whose average monthly wage hovers at just about that much.

Set in what looks to be a depressed and depressing Seoul, two scammers come together briefly before being separated by violence. With twenty-something angst always a hot topic at festivals, first time feature director Ryu Hyung-ki's slow, detached style will fit in easily with Korean and Mainland Chinese films like it. Other outlets at home or abroad seem like a long shot.

Su-young (the blank and monotone Han Su-yun) is an aimless woman in her early 20s living with her boyfriend Sang-il (Shin Hyun-ho). She works at a box-type department store loading stock and he sells unwanted ladies wear on the street. They have boring, chatty sex and seem to lead dead-end lives.

When Sang-il up and steals the hard-stolen money Su-young intended for some kind of plastic surgery. it's never explained what procedure she wants or really why her desperate pilfering kicks into high gear. Naturally, she's caught. Along for the ride is Jae-beom (Lee Hwan), a loan shark of sorts who's taken a shine to Su-young and who is just as dissatisfied with his "job" as she is with hers. Not an awful lot happens in "Century," which is reflective of the generation Su-young and Jae-beom are meant to represent. Su-young is so emotionally dead that the consequences of her actions mean little to her, and her personal desires are equally diaphanous.

Her seemingly never ending quest to earn a quick buck (which includes pharmaceutical testing) blinds her to inevitable direction she's heading; she only sees the end destination. How she can't realize her trajectory, though, is a question that does occur to the audience, and one's tolerance for poor decision-making will guide how Su-young is perceived by viewers.

Too often Su-young comes across as cold and willfully ignorant, making the character difficult to like, or more important, empathize with. Jae-beom, until he settles down in the film's second half, is simply the kind of pest most women would get a bigger brother or boyfriend to deal with. The modern focus on material wealth and beauty to the exclusion of all else is a point that's fairly well made by Ryu, but it's also one that's been made before.