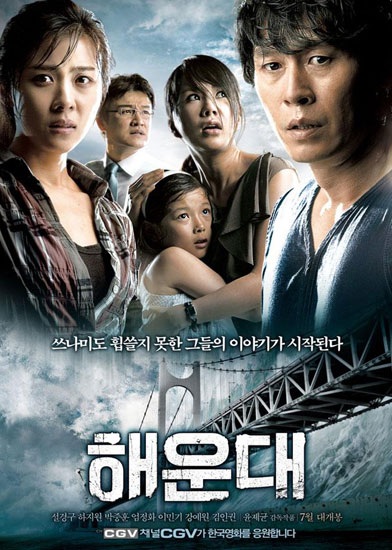 Located on the southeast tip of the Korean peninsula is the international city of Busan. A popular vacation spot on the East Sea coast, Haeundae draws one million visitors to its beaches every year. Man-sik, a native of Haeundae, lost a co-worker to a tsunami on a deep-sea fishing trip four years ago.

He has never returned to sea ever since. He now leads a simple life running a small seafood restaurant and is preparing to propose to his longtime girlfriend, Yeon-hee. Man-sik's brother Hyung-sik works as a coast guard. One day, he rescues a female college student from Seoul who promptly, comes on to him aggressively. While these everyday domestic affairs unfold, geologist Kim Hwi, an expert on tsunami research, discovers the East Sea is showing signs of activity similar to the Indian Ocean at the time of the 2004 tsunami.

Despite his warnings, the Disaster Prevention Agency affirms that Korea is in no harm of being hit. When he discovers a mega-tsunami is headed straight for the Korean peninsula, he quickly heads down to Haeundae. There he meets up with his ex-wife, who is organizing a cultural event, for the first time in seven years. He also sees his young daughter who is unaware that he is her father. Eventually, Kim gets a call about a deadly oncoming wave, with only ten minutes to spare! While the vacationers and citizens of Busan are enjoying a peaceful, hot summer day, a mega-tsunami is headed straight for Haeundae at 500 miles per hour.