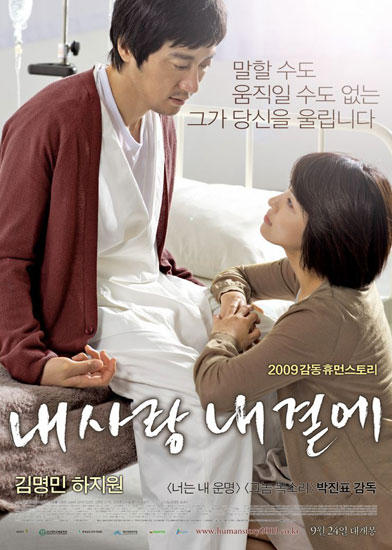 Ji-soo, a funeral director, happens to oversee the funeral services of Jong-woo's deceased mother. Being old friends, they are excited by the unexpected reunion, but the reality is more bitter than sweet. Jong-woo is suffering from the incurable Lou Gehrig's disease, and Ji-soo has been through two painful divorces. Jong-woo lightheartedly asks Ji-soo to just marry him. Ji-soo is surprised by the offer, but it doesn't seem like such a bad idea to her. She wants to start a new life with the love that is starting to grow inside her, while the fear of losing Jong-woo scares her as well. despite the disapproval of those around her.

Ji-soo still goes through with the marriage to Jong-woo. As Jong-woo's symptoms beginning to worsen with each passing day, Jong-woo gets easily irritable as he begins to lose control over more and more parts of his body. Even though he hurts Ji-soo's feelings, all she wants is to stay with him and cure his disease. Formerly known as "My Love Beside Me".