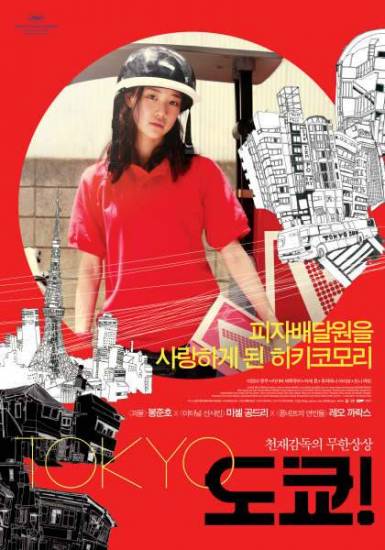 TOKYO! is an omnibus film coproduced by Korea, Japan and France

1) Michel GONDRY's "Interior Design" is the surreal fable of a couple who move to Tokyo in search of a future. While Akira's ambition (to direct movies) is clear, Hiroko drifts, gradually losing control over her life. Left alone, she wakes one morning to find a hole in her chest... By the end of the day, Hiroko has transformed into a chair. A series of nightmarish adventures and transmutations ensues, until at last Hiroko is rescued by a kind stranger and her new, fulfilling life  half woman, half-chair - can begin. (Japanese language)

2) In "Merde" by Leos CARAX, a mysterious, sewer-dwelling man spreads confusion on the streets of Tokyo through a succession of irrational and provocative acts. Who is he? Why is he here? What does he want? The city's population becomes obsessed by this strange phenomenon. When "The Creature of The Sewers", as the media have dubbed him - discovers a hidden World War 2 arsenal, confusion turns to terror, as he stages a succession of bloody grenade attacks. Captured by the police, he refuses to talk, until a fifth rate French lawyer arrives to defend him. (Japanese & French language)

3) "Shaking Tokyo" by BONG Joon-ho tells the story of Teruyuki, one of Japan's many hikimori - citizens who have withdrawn from all contact with the outside world. When a pizza delivery girl faints in his apartment during an earthquake, the unthinkable happens - Teruyuki falls in love. And when she does not return, he is forced to take an unimaginable step: for the first time in 11 years, Teruyuki leaves the dead security of his apartment for the streets of Tokyo, only to discover a city of hikimori..(Japanese language)