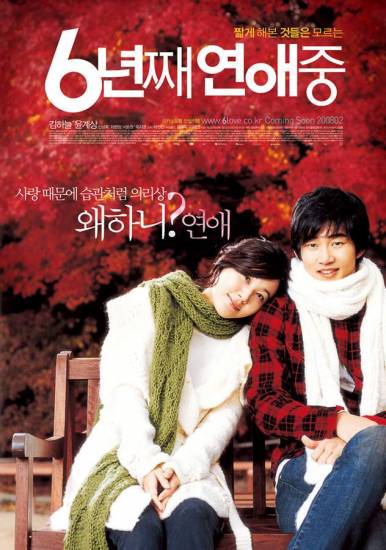 "Nothing special" is also a keyword for Da-jin (Kim Ha-neul), a hard-working editor at a publishing company, and her boyfriend Jae-young (Yoon Gye-sang), an equally diligent home shopping producer. Six years ago, they began to date. Two years ago, they started sleeping together. Now, they are next-door neighbors, but the wall separating their houses does not have any significant function. They virtually share their rooms -- and bedrooms at night. They know each other inside and out so much so that they begin to feel a bit bored, and the magical sparks and excitement is already gone. Their relationships seem to have passed a stage where something special is at work.

"Lovers of Six Years" As with other cohabitating couples, there is a risk that Da-jin and Jae-young remain unmarried and yet share so many things in life. Infidelity is one of many risks, though it's pretty fatal given that cohabitation does not entail as strong a commitment as marriage. Da-jin tries to hire a top-notch book designer for her latest project. She juggles up various strategies to win the heart of this much-sought-after designer without realizing that her charm as an attractive woman goes rarely unnoticed. By the way, Kim Ha-neul seems at ease with her role, even in a scene where she has to act as an experienced lover...