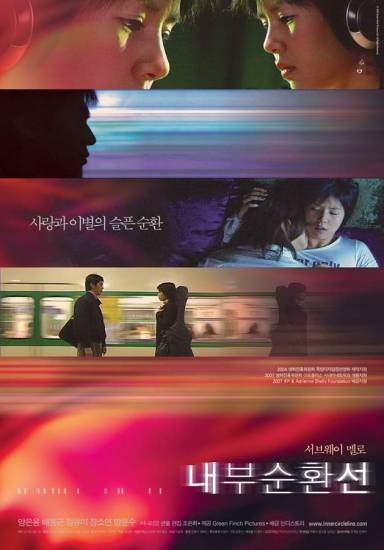 Inner Circle Line is an experimental narrative, juxtaposing the stories of two character, one male and one female, who both have the same name, Youngju. Female Youngju is a club DJ who becomes attracted to a mysterious club patron who reminds her of a past love. At the same time, her female roommate Jin has been hiding her feelings for Youngju and grows increasingly jealous of her new attraction.

Male Youngju is a locomotive engineer whose train is involved in the death of a suicidal soldier. Haunted by guilt, he is reminded of his own military service and of the love he once had. He continues to obsess about the past and becomes more and more distant from his current girlfriend Hyun.

After being rejected by Female Youngju, living with someone who doesn't love her becomes unbearable for Jin. She flees the apartment, and subsequently encounters an old love, Male Youngju. Thence, the two Youngjus' stories meet and develop into one story.

Through the intertwining of the two love stories, nobody earns the love they yearn for, but nobody gives up. They give and take pain, and throughout the circle of interrelationships, the characters revolve through cycles of love, loss, and rebirth. They are all changed, but their dreams survive in a different way.