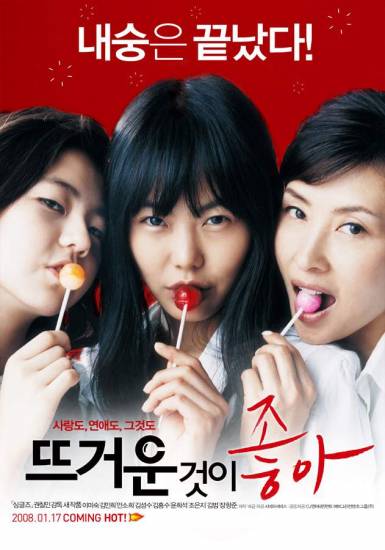 A-mi, for instance, keeps sleeping with her boyfriend Heung-soo, but she knows too well that this rocker-wannabe does not have any real chance to succeed in this tough world where there is no protection whatsoever for talentless men. A-mi willy-nilly stumbles into a better choice -- this time, a capable man named Seung-won (Kim Seong-su), who is an accountant for Deloitte's Seoul office. Except for this guy's dreadful sense of humor, A-mi vaguely assumes that her life would change for the better if she tied the knot with him.

But what really concerns her is neither of these men. She is, after all, an aspiring screenwriter, and she is determined to finish her first project, no matter what. When it comes to determination and toughness, A-mi is portrayed as a cinematic macho who used to be a hardcore chainsmoker, but resolutely quits cigarettes once she gets serious about her career -- a far stronger, almost traditional alpha male approach that is prominently lacking in the movie's male characters.

Young-mi is psychologically a big girl, too. She falls into a deep sense of loss and disappointment when she a callous (yes, male) doctor tells her that her menopause is the cause of her latest mood swings. Undaunted, she keeps her chin up, and tries not to lose her control when dealing with her sexual partner who wants to have an emotional tug of war.