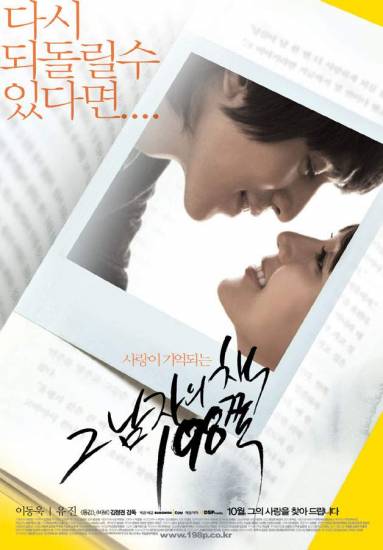 Director Kim Jeong-kwon's new movie "Heartbreak Library" brings the story of two young people tracing their past, only to discover the sad, yet true reality of love and life.

Both holding on to a painful memory, the couple meet unexpectedly, and their trip to the past drives them to the point where they finally realize that it was not the memory that was torturing them, but their obsession with it.

Eun-soo, played by singer/actress Eugene (Yoo Jin), is a librarian who takes her work very seriously. So when she discovers a tall young man dressed in a black suit ripping the pages out of books stacked next to him, she calls him a criminal.

Jun-oh, played by Lee Dong-wook, is a sad-eyed man who tears out page 198 from library books, which explains the Korean title of the film " Page 198 of His Book".

He explains to the curious, and furious, Eun-soo that his former girlfriend left him a note saying to check page 198 without mentioning the title of the book. Eun-soo, who has a personal crisis regarding an ex-boyfriend herself, sympathizes with the strange man in black, a chef, and determines to help him find the book.

The story continues as Eun-soo traces the address of the former girlfriend through the library database and later discovers why Jun-oh is so ardent in finding her, leaving her at a crossroads of her feelings and sympathy toward Jun-oh.

"Heartbreak Library" is about dealing with memories: leaving the bygones and preparing for what the future has in store. When a friend mentions to Eun-soo -- who records her past in her scheduler -- that people write future plans in a scheduler, not things that have already happened, Eun-soo replies that sometimes, reading the past reminds you what you have been thinking. For her and Jun-oh, their memories are just too bittersweet and important to forget.

Overall the film is light and pretty, but some viewers may wonder why Eun-soo is so fond of Jun-oh, even to the extent where she hops on the train with him to visit his ex and also about the rather cliche ending. The scene where Jun-oh prepares a sushi dish for Eun-soo was also a bit puzzling, as the hands were evidently not Lee's, drawing awkward laughter from the audience.

However, the beautiful scenery of the sea from Eun-soo's home, the fresh trickling rain of a summer day, the simple yet relatable lines and plot, plus Eugene (Yoo Jin)'s and Lee's natural acting, pulled the film from mere disappointment, presenting a light, romantic and slow interpretation of memories.