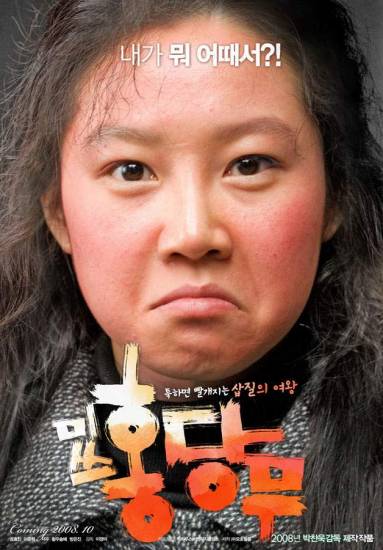 Mi-suk is a wild-eyed character in "Crush and Blush", which will be released tomorrow.

When her high school classmates pose for a group picture on a field trip, she crouches at the back and jumps at the cameraman's shout of three.

No one noticed her at school and no one notices her 10 years later when she becomes a middle school English teacher. Her students ignore her because she is not cool.

Her frumpy appearance - blushing red every time she speaks, overly chapped lips and curly, bouffant hair - makes her a figure of fun.

Her blushing peaks when she expresses her unrequited love to Mr. Seo, who was once her homeroom teacher and is now married with a child.

But Mi-suk, 29, played by Kong Hyo-jin, is not an innocent introvert. She's not the type who waits for her Prince Charming to ride by on a white steed and scoop her into his arms.

"When most young women fall in love, they keep quiet", said Lee Kyoung-mi, the movie's director, during an open talk at the 13th Pusan International Film Festival early last month. Not so for Mi-suk.

"Women who lack self-confidence can't always be honest about their feelings. But Mi-suk expresses every feeling inside and out", she said.

According to Choi Yoon-hee, 61, who gave a lecture before a special screening of the movie at Daehan Theater in Chungmuro, central Seoul, on Monday, the key to healthy living is being honest about who you are.

Choi is a prominent figure in the world of advertising in Korea and is often seen on television giving talks on lifestyle and self-help. She appears on "Every Morning", which is shown on KBS 1, and on Story On's "The Park Chul Show".

"Mi-suk goes against the grain. She follows her heart, not her head. She overcomes bias with her honesty. It's not easy to find people like her these days", Choi said.

In her talk, Choi said that every individual should be respected for his or her own worth and that lacking in self-confidence was not something to be ashamed of.

Choi went on to explain that life is broadcast live and that there are no dress rehearsals. Life doesn't offer a round-trip ticket after death. "Now is the time to act", she said.

But not everyone at the screening agreed. Lee Hyun-woo, 24, felt something was lacking.

"It's a good idea to create a fearless and strong-willed character", said Lee. "But the way Mi-suk overcomes the problems in her life is not very credible".

One such far-fetched scene is when Mi-suk logs on to an instant messenger program using Mr. Seo's personal log-in and contacts his secret mistress, another teacher at the school. She uses this opportunity to try to break up the illicit affair.

No matter what you think about Mi-suk and her behavior, she is trying to "face life and be honest", which was the director's aim

"Forget the idea that the world is fair. [Physically unattractive] people like us need to live life more to the full", Mi-suk says in the movie.