The Accidental Gangster and the Mistaken Courtesan 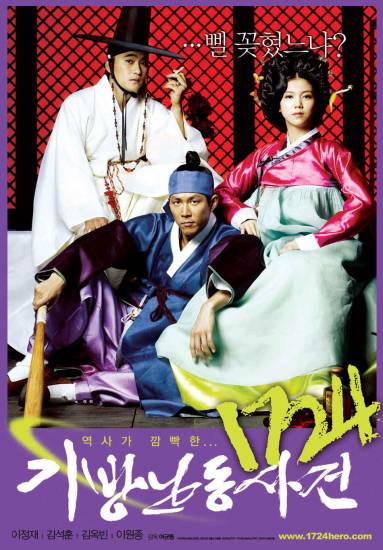 Korea, 1724. Once upon a time in the Joseon Dynasty, Chun-doong (Lee Jung-jae) meets a beautiful woman while in the middle of a fight in an old market. Having fallen in love at first sight, good fortune is with him and he finds her once again. Her name is Seol-ji (Kim Ok-bin) and she works as a gisaeng, a Korean traditional singing and dancing girl. They spend a memorable night together but Chun-doong loses her again when she moves to work at another bar. When he finds her new hiding place, however, he is warned away by her new manager, Man-deuk (Kim Suk-hoon) who has connections in the city's underworld. One day, while still despondent without Seol-ji in his life, he accidentally knocks over and kills the boss of the Jjak-gwi gang. Before he knows it, because of his fighting skills Chun-doong becomes the replacement boss. Soon, there is a gathering of the region's gang bosses at the bar where Seol-ji now works. In the middle of the meeting, Chun-doong causes a disturbance to steal Seol-ji away under the nose of Man-deuk. The meeting turns into chaos because of the incident and ends abruptly. A furious Man-deuk teams up with rival gangsters to plot the downfall of the Jjak-gwi gang...