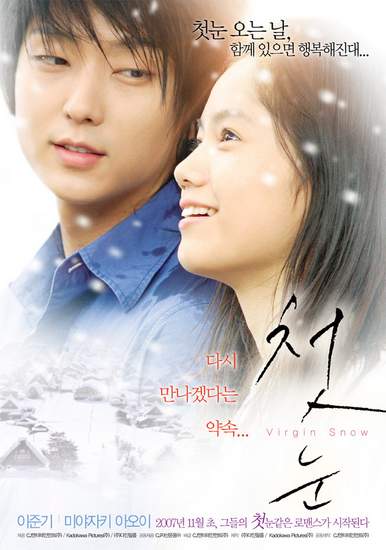 Min moves to Japan following his professor father. One day at a local shrine, he meets a beautiful Japanese girl with innocent eyes. Her name is Nanae, and she is an aspiring painter. Min falls for her at first sight, and soon learns that Nanae attends the same school to which Min has just transferred. They become friends, and despite the culture and language barriers it is an intense friendship. When his grandmother suddenly falls ill, Min hastily returns to Korea but cant get in touch with Nanae beforehand. After his grandmother regains her health, he hurries back to Japan to reunite with Nanae, but she is nowhere to be found. Had his true feelings for Nanae not been apparent to her? Why has Nanae disappeared without a word?

"Virgin Snow" is coproduction between Japan and South Korea.