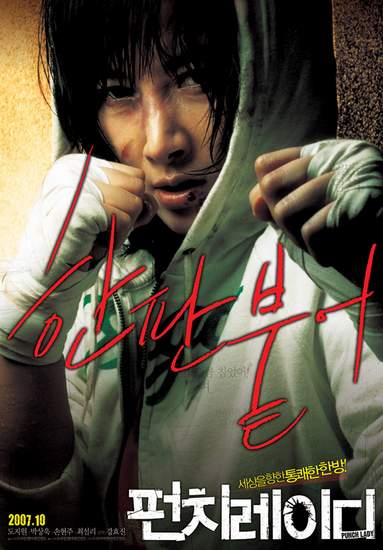 Spousal abuse is not a new cinematic theme, but "Punch Lady" takes a fresh approach to the tricky issue by portraying the psychological trajectory of a battered Korean woman. The question is whether the likely climax -- whatever triumph the victim will manage to get -- meets viewers' expectations in a swift manner, just like the bullet-speed punch of a professional fighter.

After all, this movie, the debut feature by Kang Hyo-jin, involves a professional K1 fighter, Ju-chang (Park Sang-woo), and his timid, shy, self-conscious 36-year-old wife Ha-eun (Do Ji-won). The opening is telling: the couple is engaged in a K-1 fight in the living room, with all the vicious tricks fully deployed ... well, at least by the seemingly crazy husband. What is hard to understand, especially when the film is set in the 2000s, is why Ha-eun still sticks around this monstrous wife-beater.

The level of violence is almost unbearable. We see Ha-eun virtually flying over into the corner of the kitchen, with saucers and spoons scattered around. Bruises are all over her face and body, reflecting her tortuous daily routine. But, strangely, there's nobody who wants to report this extreme domestic violence to the police.

There is one police report, though. When Ju-chang is about to hit his (rightly) rebellious daughter for no apparent reason, Ha-eun taps into her motherly instinct and hits him on the head from behind. Thanks to the 'victimized' husband's formal complaint to authorities, Ha-eun is put behind bars. Strange as it is, nobody, including any police officers, cares about how such an incident happened in the first place; people pay little attention to all the apparent signs of a battered wife.

Defying logic, in a sense, is inevitable. The ultimate destination of the movie is a final showdown between the invincible husband and the suffering wife. So, details about domestic violence remain unexplained. For instance, there is no explanation about why Ju-chang is habitually beats up his wife, even though he almost always knocks down his counterparts on the K1 fighter stage, thus satisfying, at least partly, his animalistic instinct for destruction and victory.