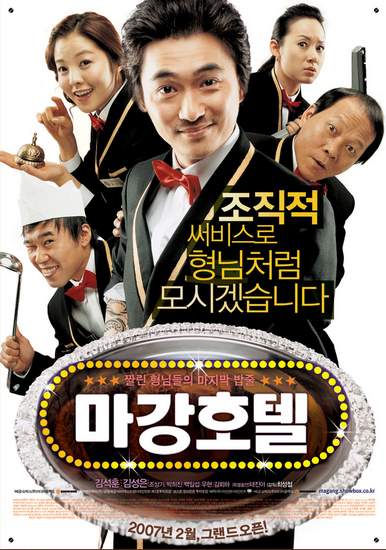 The premise is that in the aftermath of the Asian financial crisis, Korean gangsters have few other options but to adapt to the relentless juggernaut of capitalism. To survive in this tough winner-takes-all business environment, even rival mobster groups should join forces through a corporate-style merger, and push for no-nonsense restructuring plans.

One of the victims is Dae-hang (Kim Seok-hoon), who used to be No. 2 man of the Musang gangster group. Following a fast-paced merger with another gangster group, he suddenly finds himself plunging into a dismal state of joblessness.

To get back his job, he has to complete a mission of forcing the owner of a regional hotel to pay a large sum of cash, and first-time director Choi Seong-cheol spends most of the running time describing Dae-hang's travails at the old-fashioned hotel that is named "Ma Gang" (originally "Baek Ma Gang", but the first letter is missing due to poor maintenance).