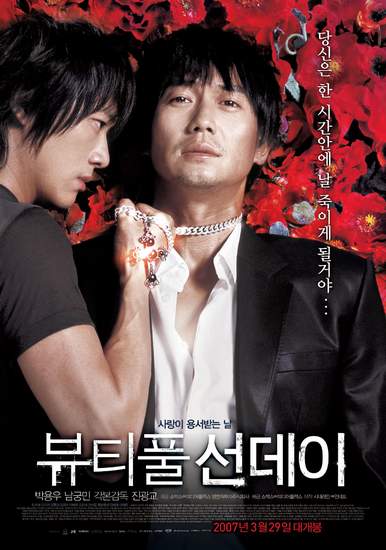 Jin Kwang-gyo's "Beautiful Sunday" pretends to be a detective-mob thriller, delving into an underground power struggle, and with police colluding with gangsters, drug trafficking and conspiracies. But the real message is so inadequately delivered that audiences leave the theater feeling more bewilderment than sympathy.

The movie starts with a seemingly routine drug bust at an anonymous port, and Kang (Park Yeong-woo), a police detective, is the point man. Rolling his eyeballs wildly, he sips a bottle of liquor before racing frantically to the crime scene.

What follows is a series of fist-fighting and chase scenes, with kicks and punches flying all over the place. A big chunk of the illegal drugs, however, ends up in the wrong hands - it turns out that Kang has a secret deal with another mob group.

Kang is not a hopelessly corrupt police detective, however. He has to care of his wife, who is in hospital with a coma. The medical bills are mounting and he needs more money, regardless of where it comes from.

What Kang fails to anticipate from his blind pursuit of extra cash is that mobsters never let go of their profits easily. Stolen drugs should be returned no matter what, and since Kang was responsible, the rival gang devises a plan to settle the score.

The tension goes up quickly when revenge is taken in a way that puts Kang on the spot. He is now forced to return the drugs as well as his secret cut of the cash.

While Kang confronts a make-or-break personal crisis, a totally unrelated subplot emerges. Min-wu (Namgoong Min), a student with aspirations of becoming a civil servant, falls in love with Su-yeon (Min Ji-hye), a girl who lives in his neighborhood.

Min-wu does not have the guts to talk to her, so he watches her from a distance, his obsession growing. One day, he notices that his beloved girl has a boyfriend and is crushed when he sees the couple going into a motel.

Though disappointed, Min-wu does not want to let go of her. He chases after her one night and rapes her. He regrets his reckless, immoral and illegal act, but he still cannot move on.

What's unbelievably unrealistic is that Su-yeon does not remember Min-wu's face at all. Time passes, and Min-wu tracks her down at a bookstore where she works and approaches her. Realizing that she does not recognize him, Min-wu begins to court her, and the two eventually marry.

"Isn't that a happy ending?" a character in the movie observes. The wife thinks so - until she discovers the true identity of her gentle and kind husband. When the truth comes out, Min-wu happens to commit another crime, which he also regrets but tries to justify, calling it an inevitable consequence of his "true love".

A clue to the movie's ultimate message emerges when the two ill-fated men - detective Kang and Min-wu - face off at the police station on Sunday, which partly explains the film's title. The predestined and almost psychedelic encounter represents much more than a get-together of unfortunate souls, because these sinners, however guilty, did what they did for love - or so they believe.

The story, which explores the issue of whether love can justify everything (including rape), is built on a foundation of fear: Fear of losing a loved one, credibility, self-respect. But the film's sugarcoated cinematic justice - or justification - isn't pretty, and its grossly beautified title is also irrelevant, if not misleading.