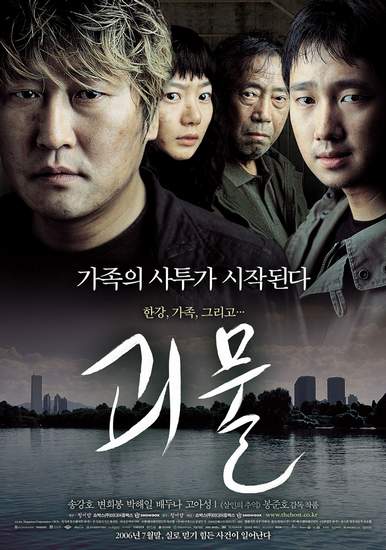 Gang-du is a dim-witted man working at his father's tiny snack bar near the Han River. One day, Gang-du's one and only daughter Hyun-seo comes back from school irritated. She is angry at her uncle, Nam-il, who visited her school as her guardian shamelessly drunk. Ignoring her father's excuses for Nam-il, Hyun-seo is soon engrossed in her aunt Nam-joo's archery tournament on TV. Meanwhile, outside of the snack bar, people are fascinated by an unidentified object hanging onto a bridge. In an instant, the object reveals itself as a terrifying creature turning the riverbank into a gruesome sea of blood¡¦ Amid the chaos, Hyun-seo is helplessly snatched up by the creature right before Gang-du's eyes. These unforeseen circumstances render the government powerless to act. But receiving a call of help from Hyun-seo, the once-ordinary citizen Gang-du and his family are thrust into a battle with the monster to rescue their beloved Hyun-seo.