My Wife is a Gangster 3 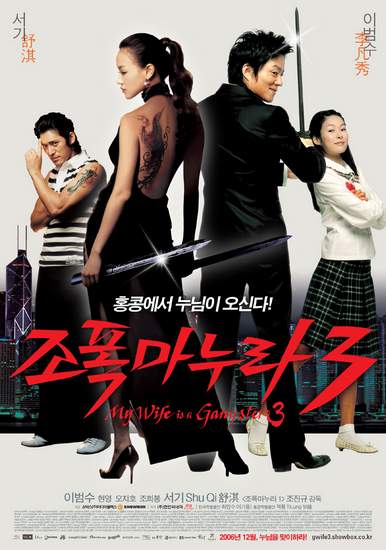 "My Wife is a Gangster 3", the third (yes, the THIRD) installment of this declining franchise, successfully evokes the latter emotion as it takes the thinnest of storylines and combines it with a cliched comic premise, to produce a painful-to-watch piece of cinematic trash that should have you running back to the video store in search of something that at least pretends to be a decent film. This is an action movie in which the running time seems to be a lot longer than the plot, so thin is the premise. The film does have the undeniably striking triad gang member Aryong, played by Taiwanese actress Shu Qi (of 2002's "The Transporter"), who is sent to Seoul from Hong Kong to avoid an all-but-unexplained gang war in which her gang-boss father is embroiled.

In Korea, she is left in the care of the pinheaded gangster Ki-chul (Lee Beom-soo of "Oh! Brothers"). Aryong has ostensibly chosen to lie low in Seoul to look for her long-lost Korean mother. This tacked-on side-plot provides an excuse for her to come to Korea, but little else. The rest of the movie is left to rely on the supposedly hilarious concept that, although she is a woman, Aryong is perfectly capable of taking care of herself.