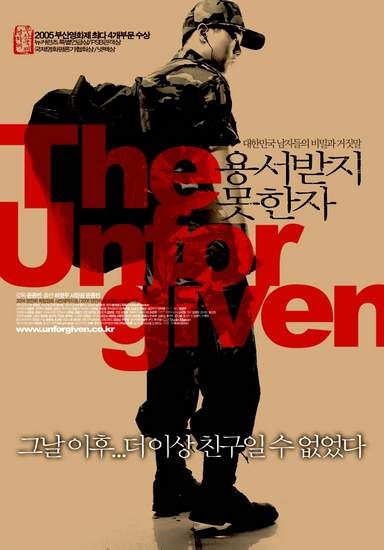 "The Unforgiven" marks the debut of Korean director Yoon Jong-bin in impressive fashion, having won several awards at the 2005 Pusan Film Festival, including the FIPRESCI and NETPAC prizes. What is most remarkable about this feat is the fact that the film is actually the director's feature-length graduation thesis, made while completing his university studies. Whilst this may conjure up images of amateurish pretension, the film is wholly professional and skilfully made in a way which belies its micro-budget and Jong-bin's lack of experience. Indeed, the director manages to craft believable characters and a tense atmosphere in a way which puts many 'proper' films to shame. The plot is set amongst young Korean men carrying out their compulsory military service, and follows Seung-young (Seo Jang-won), a new recruit who finds that his commanding officer, Sergeant Tae-jeong (Ha Jeong-woo,"She's On Duty") is an old school friend.

Tae-jeong looks after Seung-young, and tries to help the stubborn and contrary youngster adjust to the strict hierarchies and harshness of military life. As time passes, Seung-young's resistance wears down, and he finds himself understanding, and even becoming more like the superior officers he previously struggled against. Matters come to a head when he is given command of Ji-hoon (played by thedirector himself), a slovenly newcomer whose constant incompetence tests Seung-young's patience, and eventually forces him to act.