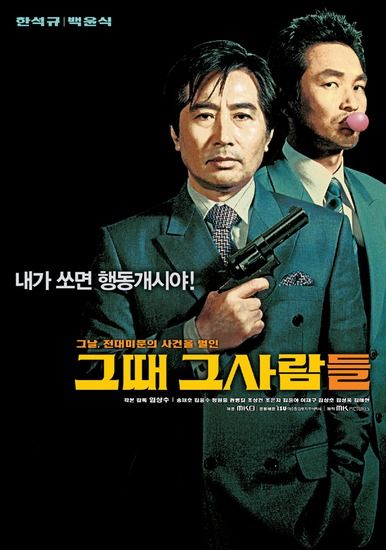 The President's Last Bang (Hangul,RR: Geudttae Geusaramdeul)1 is a 2005 satiric black comedy film by South Korean director Im Sang-soo about the events leading to and the aftermath of the assassination of former Korean President Park Chung-hee by his close friend and Korean Intelligence Agency director Kim Jae-kyu.

The fictional portrayal of the former President has raised a storm of controversy, leading to a suit against the film by Park Chung-hee's only son, Park Ji-man. In 2005, a ruling by the Seoul Central Court ordered that 3 minutes and 50 seconds of documentary footage (mostly of demonstrations) be censored out of the film. In response, the director had the excised footage replaced with a blank screen for its running time. During its theatrical run, both nationally and internationally, only the censored version was shown.

The ruling was appealed, and in August 2006 overturned, with the court issuing the following statement: "We must broadly confirm the right of free expression concerning the depiction of public historical figures." The court has also ordered MK Pictures, the production company that financed the film, to pay President Park's family 100 million won (roughly $105,000 USD).