The King and the Clown 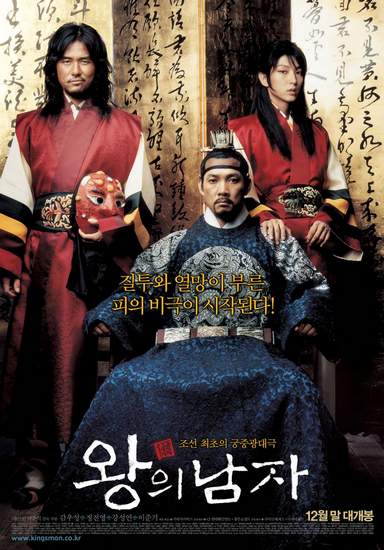 Set in the early 16th century during the reign of King Yeonsan, two male street clowns and tightrope walkers, Jangsaeng (Gam Wu-seong) and Gonggil (Lee Jun Ki), are part of an entertainer troupe. Their manager prostitutes the beautiful Gonggil to rich customers, and Jangsaeng sickens of this practice. After Gonggil kills the manager in defense of Jangsaeng, the pair flees to Seoul, where they form a new group with three other street performers.

Together the group comes up with a skit mocking some members of the Royal Court, including the king and his new concubine Jang Noksu. After they are arrested for treason, Jangsaeng makes a deal with Choseon, who turns out to be one of the King's servants, to either make the king laugh at their skit or to be executed. They perform their skit for the king, but the three minor performers are too terrified to perform well. Gonggil and Jangsaeng barely save themselves with one last joke at the king, who laughs and then makes them part of his Court. The King falls for the effeminate Gonggil, whom he calls to his private chambers often to perform finger puppet shows. Jangsaeng becomes jealous of this relationship (though it is never explicitly stated that there is anything more than friendship between him and Gonggil - this topic of friendship/love has been much debated by film reviewers). Meanwhile, the King becomes more and more unstable. He makes the clowns perform a skit depicting how his mother, the favorite concubine of the former king, was forced to take poison after being betrayed by other jealous concubines. The King then slaughters these concubines at the end of the play. Jangsaeng asks Gonggil to leave with him and the gang at once before the King kills them too during one of his homicidal fits. Gonggil, who initially sympathized with the King, begs the tyrant to give him his freedom but his pleas fall on deaf ears.

The king's main concubine, Jang Noksu, becomes enraged by the attention the king has been lavishing on Gonggil. She tries to have him killed during a hunting trip, resulting in the death of one of the members of the street performing team. Days after the hunting trip, there is a kiss between the king and Gonggil (which has caused much buzz and excitement among film reviewers). Then, she tries to have him jailed by having flyers run in Gonggil's handwriting insulting the king severely. Jangsaeng takes the blame for the crime for which Gonggil has been falsely accused and is imprisoned.

Choseon secretly releases Jangsaeng, telling him that he should forget Gonggil and leave the palace. But Jangsaeng ignores the advice and returns to walk on his tightrope across palace rooftops, this time openly and loudly mocking the king. The King shoots arrows at him while Gonggil tries in vain to stop him. Jangsaeng falls and is caught, and has his eyes seared with burning iron as punishment before being thrown into prison again. Gonggil attempts suicide, but his life is saved by the palace doctors. The king has Jangsaeng walk his tightrope blind. As Jangsaeng tells the story of his and Gonggil's trials and tribulations while balancing on the rope, Gonggil runs out to join him. They have a conversation filled with much hidden meaning and significance. Gonggil asks Jangsaeng what he would like to return as in his next life and Jangsaeng replies that he would still choose to be a clown. Gonggil answers that he has found his King and he too would return as nothing else but a clown.

Throughout the film, the tyranny of the king and corruption of his Courts is revealed. At the very end there is a popular uprising resulting in an attack on the palace, and as people storm the court, Jangsaeng and Gonggil jump up from the rope together, and Jangsaeng tosses away his fan, signifying the death of both which is never actually shown in the film. The last scene is a happy one where Jangsaeng and Gonggil appear to be reunited with their clowning troupe, including the friend who died earlier during the hunting incident. The whole company jokes, sings and dances, as they all walk away cheerfully into the distance.