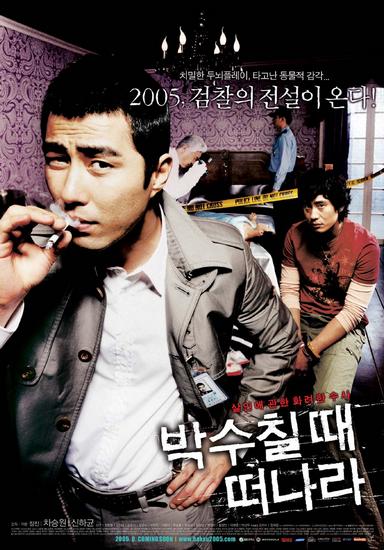 The Big Scene is the latest film from Korean director Jang Jin, best known for the abstract gangster comedy Guns and Talks, in which he attempted to present a new spin on the usual hitman movie formula. Here, Jin does the same, trying to reinvigorate the traditional detective thriller by working in the cynical theme of modern society

The film begins in familiar fashion, with the discovery of a woman's body in a hotel room, apparently stabbed to death. The police already have the prime suspect in custody, Kim Young Hoon (the ever twitchy Shin Ha Kyun, Save the Green Planet) who was spotted visiting the victim earlier in the evening. The police investigation, led by prosecutor Choi Yeon Hee (Cha Seung Won, Ghost House) takes place in a special custom built office where every aspect of the case can be filmed for a television program. Unfortunately, the producers of the program serve only to interfere with and impede the police, and it soon becomes clear that the case is not as simple as it first appeared.