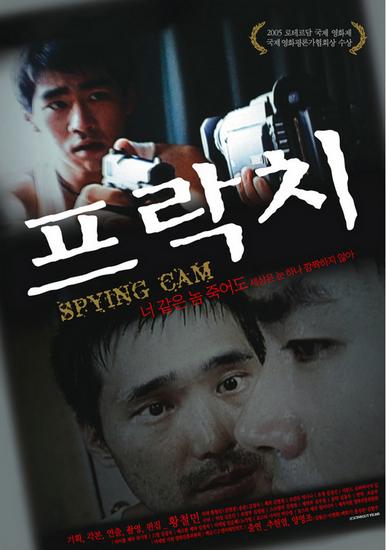 Starting out simply, "Spying Cam" heads into increasingly complex territory, with observations about personal and sexual politics shading into commentary on larger social issues. Something will be lost on auds with no working knowledge of recent Korean history, but most aspects can be viewed as both universal and quirkily unique.

During a heat wave, two men (Choo Heon-Yeop, Yang Young-Choo) are locked in a tiny apartment. Neighbors wonder if they're gay, and there is an intense dynamic between them, but that's mostly because one's a cop and the other is a protected witness. Only things on hand are a fan and a copy of "Crime and Punishment"; they start acting out scenes from the novel, even diagramming the Russian names. They also drill a peephole to catch the antics of a party girl next door, and she eventually becomes their "Sonya", leading to an ugly turn. Things open up in winter, when the men leave for parts unknown, and the politics become (slightly) clearer. The title cam is the witness's ever-present Sony, but pic's take on voyeurism marries desire to totalitarian in a clever, quietly disturbing way.