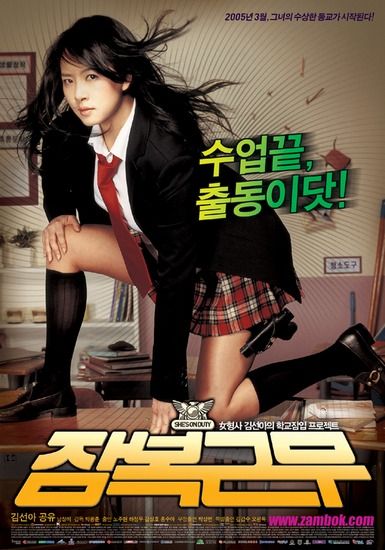 She's on Duty (Jambok-geunmu) is a 2005 South Korean film about a police detective who goes undercover in a high school to befriend the daughter of an elusive gangster. Despite being heavily marketed the film was generally considered a box office disappointment. It stars Kim Seon-ah as Chun Jae-in, Nam Sang-mi as Cha Seung-hee, Gong Yoo as Kang No-young, Kim Kap-su as Cha Young-jae, and Kim Sang-ho as Detective Kang.

Chun Jae-in, an orphan-turned-police detective, is assigned a job to go undercover in a high school to befriend Seung-hee, the daughter of notorious gangster Cha Young-jae, and protect her from any of her father's enemies who may want to use her as bait to get Cha Young-jae to do what they want, as well as get information about her father's work from her. At first, Jae-in is very reluctant to accept the job; however, her uncle, also a detective, pushes her at the last minute to take it. Jae-in is considered a loser when she first steps into her class, and the gang girls confront her afterward and challenge her to a fight at the backyard of the school. Jae-in, being a policewoman, easily beats them up. This earns her some sort of respect, although what Jae-in really wants is Seung-hee's friendship. She eventually gets this with the help of Kang No-young, a handsome classmate and next-door neighbor who she starts to like; however, Jae-in thinks her crush is wrong because of their age difference.

Meanwhile, a new teacher arrives at their school. Jae-in later is informed that he is also an undercover agent, working on her side. She becomes slightly suspicious of him and vaguely recognizes his face. One day after school, Jae-in and other policemen spot Cha Young-jae outside an airport; they rush to catch him, but his rivals are also on the chase. They meet up in the parking lot, where Cha Young-jae is trapped.

Suddenly a mysterious motorcycle rider speeds into the middle of the group and his motorcycle produces white smoke, therefore allowing Cha Young-jae to get away. Jae-in and other police go after the motorcycle driver, since Cha Young-jae has already gotten away. The undercover teacher also happens to be at the event and shoots at the motorcycle driver, but the driver gets away. Jae-in rushes after him, but the undercover teacher puts a gun to her head. She assumes it is not serious and runs after the driver, but all she finds is a watch strangely identical to that of No-young's. When she gets home, she knocks at No-young's door and confronts him about his watch. No-young shrugs it off and is playful; however, once he gets inside his apartment, he takes off his shirt, revealing a bullet wound to the camera. Jae-in does not know of this, but she suspects that No-young is also undercover as a spy.