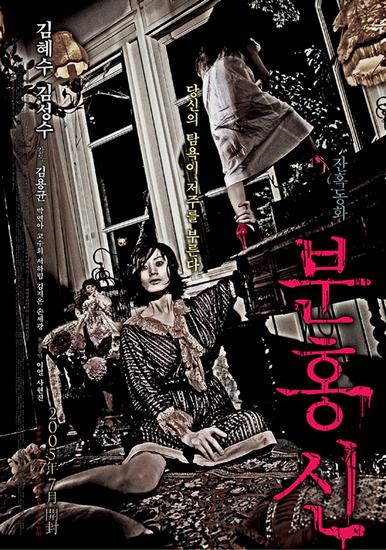 The Red Shoes (Hangul, Revised Romanization Bunhongshin) is a 2005 horror film written and directed by Kim Yong-gyun. It is inspired by the fairy tale of the same name by Hans Christian Andersen, in which an unfaithful step-daughter could not stop dancing in her enchanted red shoes.

The film opens with a girl waiting for a friend in a subway station. She notices a pair of pink shoes at the edge of the platform. As she approaches them, eerie music plays in the background until she is startled by another girl who seems to appear out of nowhere. The shoes mysteriously are already on the first girl's feet as she explains she just found them there. The other girl coldly claims the shoes are hers, that she saw them first, and the two begin to fight.

Eventually, the second girl shoves the first girl to the ground, and walks away with the shoes, which mysteriously end up on her feet. Seeming happy and completely unlike her behaviour when she was fighting over the shoes, she walks down an abandoned corridor until she hears footsteps behind her. She turns and looks terrified as something rushes towards her, knocking her to the ground. We see the shoes some distance away from her, filled blood that sinks into the shoes, then disappears as if it was never there. The girl looks horrified, but this time with her eyes are fixed in the direction of the shoes. She begins to scream, and as the camera pulls away, we see her sitting in a trail of blood leading away from her with her feet cut off at the ankles.

After a scene of a mysterious woman dancing, the protagonist, Sun-jae (Kim Hye-su), is introduced. Her husband, Seong-jun (Lee Eol) is sitting in the living room watching their daughter Tae-soo (Park Yeon-ah) practice ballet. Sun-jae calls for him to come and eat, but he is more concerned with his daughter's dancing. When he finally does eat, he notices that the meat on his plate is still somewhat raw. He gives Sun-jae a disparaging look, and leaves the table.