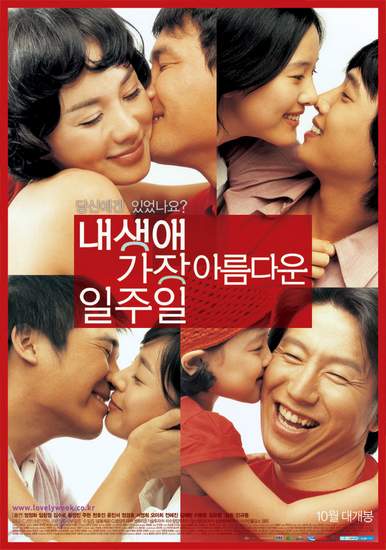 All for Love (aka My Lovely Week) is a 2005 South Korean romance film about a divorced psychiatrist who meets a tough, macho detective. It was Min Gyu-dong's solo directorial debut, having previously collaborated with other directors.

This movie deals with 5 couples; An elderly couple, the guy owning an old cinema and the lady owning a coffee shop in front of his theatre. A down on his luck salesman, who just got married, keeping it a secret from his wife that he sneaks onto the subway and tries to peddle his trinkets to subway passengers. A bill collector that is fed up with his job (who tries to collect from the down on his luck salesman) is offered a spot on a local reality television to relive his college basketball days and also fulfill the wish of a terminally ill girl who's dead mother told her that her father was that basketball player.

A divorced father that works in the music industry, with only a son in his life needs to find a maid, his divorced wife, a fiery spirited psychiatrist, who has perhaps met her match in a rough and tumble cop. Finallly a famous male pop singer that becomes stricken with a mysterious illness after his contract is cancelled by the music executive dad, meets a young nun who tried to killed herself because she has always had strong feelings for the hosptialized pop singer. This is a lovely week in the lives of these people.